Well, this is all very new and exciting – I have never partaken in a WIP It Up Wednesday before. Sure, I’ve lurked on other people’s but that’s hardly the same. Right here, right now, I am surrendering my Wipster Virginity.

The story I’m sharing with you today has barely been started. I’ve actually got two more books to finish before I can get stuck into it. But I wanted to share it because it’ll be the third instalment of what I’ll call my “Westbrook Trilogy” (you know when I’m giving interviews on arts programmes and stuff). There are all stand alone books set in Victorian England which are connected by the Westbrook family. Lord Westbrook’s Muse came out last week – you should go and check it out!). This WIP is nominally titled “The Westbrook Trial” (although that will almost certainly change – I’m rubbish at titles.)

Lord Westbrook’s brother, Jasper Westbrook has been arrested along with his lover, Charles Taylor because this is 1878 and being in love with another man is enough to land you in prison. This isn’t Jasper and Charles’s story though. I don’t think I’m ready to try a M/M romance just yet.

This is the story of Charles’s sister, Flora – who is determined to help her brother in any way she can – and William Beech, a solicitor and very close friend of Charles and Jasper.

This scene below takes place just after the arrest of her brother. Flora is in shock and it leads to her making a very revealing confession to William.

“Here, drink this,” said William, passing Miss Taylor a glass of brandy. She accepted the drink and took several large sips, becoming noticeably calmer as she did so. “I understand that it must be hard for you to accept your brother’s predilections.”
Miss Taylor shook her head. “That isn’t it. I don’t blame Charles for wanting to be with Mr Westbrook.. I know others consider them abnormal but who am I to judge what is normal? I often have feelings which I am sure would horrify you, Mr Beech.”
William looked at the slender beauty sitting in his study and doubted that she was capable of saying anything that could horrify him. “Surely not, Miss Taylor,” he said.
“It’s true,” she replied. “When I think of love, I think of the most terrible things.”
“What on earth do you mean?” asked William gently.
Miss Taylor finished off the brandy in her glass. William refilled it, sensing that the liquor was probably giving her the courage to talk to him.
She took another sip immediately and began haltingly to speak, her eyes focused on the floor by her feet. “I like to imagine women being punished,” she said in a voice almost too quiet to hear. “I think about women being spanked or caned or thrashed with a belt. It gives me … pleasure when I think of it. And I like to think of those things being done to me. How I would feel if someone struck me in that way.” She took another gulp of brandy. “So you can see why I cannot possibly condemn Charles. My own perversions are so much worse. I fear there must be something dreadfully wrong with me to think the things that I do. Forgive me, Mr Beech, if I have disgusted you.”
Of the dozens of emotions that Miss Taylor’s words had fired up inside of him, William could quite confidently say that not a single one came close to disgust.
His heart thumping, he stood up and walked to his bookshelf from where he removed a slim volume in a plain cover.
“I think you are too hard on yourself, Miss Taylor,” he said. “Perhaps you would like to take a look at this.”
Miss Taylor took the book and looked at the page to which he had opened it. Her eyes widened in shock. 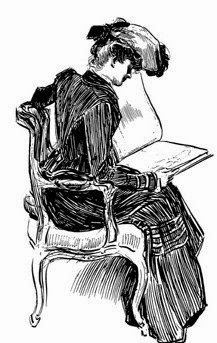 He had chosen a page with which he was very familiar. It contained an illustration of a woman was bent over a man’s lap, her skirts and petticoats thrown over her back and her bare bottom prominently on display. The man held in his hand a bundle of birch twigs which he held poised ready to strike the woman across her exposed posterior. The welts across her back side showed that the man had already delivered several stinging blows. The woman’s mouth was open in protest but she did not appear to be struggling to escape. Indeed, the pose in which she had been drawn suggested that she was actually lifting her bottom into the air as if presenting it for more punishment.
Miss Taylor stared at the picture, trembling slightly. Looking at her reaction, William suddenly felt like a heel for exposing her to such an image. She was a well-brought up young lady. What had he been thinking? He went to remove the book from her hands. “Forgive me,” he said. “That was exceedingly inappropriate. I should not have shown you such a thing. Please don’t be alarmed.”
As he moved to remove the book from her hands, Miss Taylor gripped the book tighter. “I am not alarmed,” she said, her eyes still riveted to the picture. “Mr Beech, this drawing – it must have taken many hours to complete, don’t you think?”
“I imagine so.”
“And then somebody printed it and bound it and someone – you – bought it. And all so that people could see this picture of this woman getting her backside thrashed like this?”
“Yes.”

Miss Taylor looked at him, her eyes shining. “Then other people feel the same way I do? I am not the only one?”