How important are character names in books?

Sure, a name is often the first thing your readers will learn about a character but surely any name will end up fitting if you’ve written the character well enough. Like with real people.

Unlike fictional people, real people don’t have proper personalities when they’re given names. Sometimes they don’t even exist yet. Everyone matches their name though. You know your friend, Josh? He’s like totally a Josh, right? In fact Josh is so Josh-y that he actually informs your opinion of Joshness is all about. Pick any of your friends and they will have the absolutely most appropriate name for their personality.

So, if parents can do it without even trying surely writers should have no trouble at all. I mean thinking of the best words for things is what we do, right? And what’s name, if not the best word for a particular person.

Douglas Adams once responded to thirteen year-old young novelist, who was having great difficulty thinking up names for characters: “If you are having trouble in thinking up character names you are probably using the wrong kind of coffee. Have you tried an Italian blend?”

Adams’s coffee must have been top-notch given that he came up with character names that included Slartibartfast, Zaphod Beeblebrox and Eccentrica Gallumbits, the triple-breasted whore of Eroticon Six.

Romance writing has its own naming conventions. As a young teenager, I devoured Mills & Boon romances and quickly realised that there was a distinct naming convention at work. All the alpha male heroes had to have tough, monosyllabic names with distinct that consonant sounds which showed they were tough no-nonsense kinda guys: Brad, Clint, Tex, Max, Duke, Tate, that sort of thing. Names you could shout out in the middle of a bar fight over the sounds of chairs being smashed over people’s heads. The heroine’s names were usually longer flowerier and unusual enough to remind you that the heroine was that little bit special. Something like Celestia, Delphine, Linnea or Adoria.

My books so far have both been set in Victorian times which obviously limits the possible names for my characters. My plans of having a 1890s heroine called M’kaylah have been shelved for now.

There’s an excellent gadget called the NameWizard at BabyNameWizard.com which will show you on a graph how popular names were in any year. It allows you to see how likely a name would be for the time period in which you are writing. It also allows you to marvel at the weird spikes in baby naming fashion trends. Why was there a sudden spike in the popularity of ‘Boris’ in the ’50s and ’60s when it had been roundly shunned before and after? 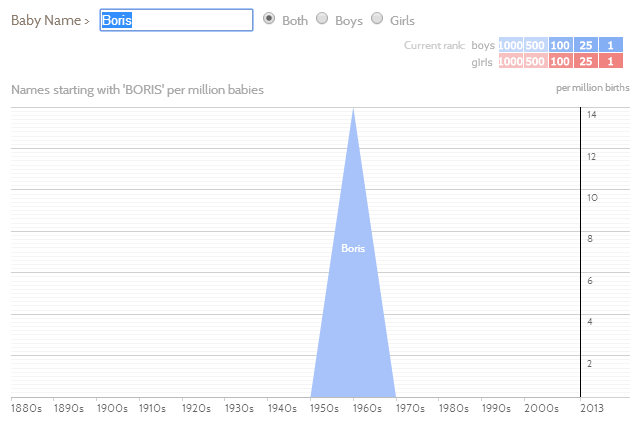 I recently read the first chapter of a Barbara Cartland novel set in 1816. Two of her protagonists were called Cheryl and Sharon. You know that scene in Ted where Mark Wahlberg rattles off a bunch of white-trash names? If you were to recreate that scene with British names, then Cheryl and Sharon would both be there.


(No offence to any Cheryls and Sharons reading this of course, you guys are pure class.)

I wanted to give Cartland the benefit of the doubt. Maybe, those names were wildly popular in Georgian times. I checked though. Computer says no. 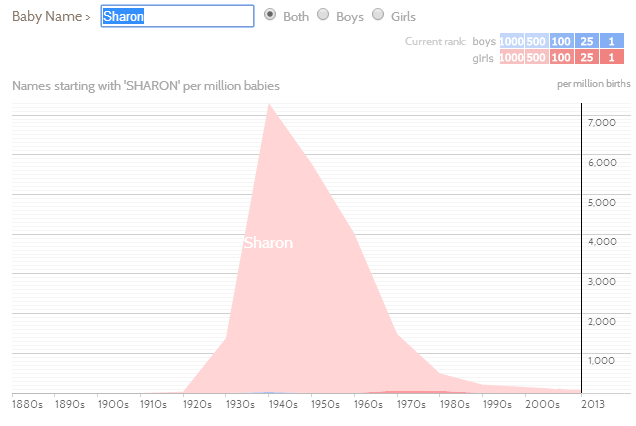 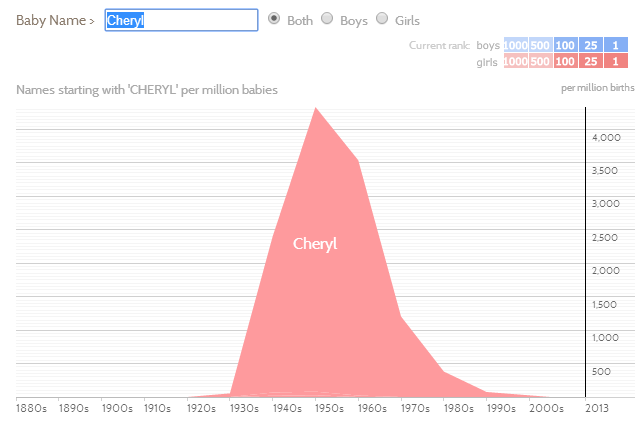 The best character names are the one the ones that epitomise your character so perfectly that they become shorthand for that type of person afterwards. Charles Dickens was a master of this – Scrooge is now the name for both the man and the character flaw. Not that Dickens was particularly subtle. The grinding schoolteacher in Hard Times was called Mr M’Choakumchild.

There are some truly great fictional character names out there. Scarlett O’Hara and Rhett Butler, for instance. (And, they conform to the Mills & Boon naming convention, I’ve just realised.)
Jay Gatsby. Norman Bates. Harry Potter. All the character’s names in Grease. If you showed someone who had never seen Grease a picture of the Pink Ladies, they would be able to tell you straightaway who was who out of Sandy, Rizzo, Frenchy, Jan and Marty. There’s no way to test this because obviously there isn’t a single person anywhere who hasn’t seen Grease but I bet I’m right none the less. 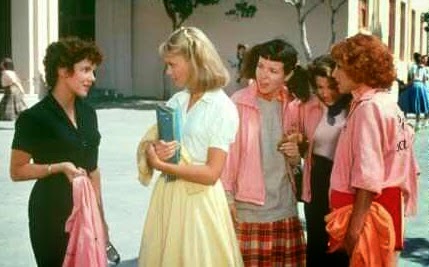 I don’t know if I will be able to come up with perfect character names for all my books although I am resolved to select a name I can actually write for the next one. The heroine of my latest book is called Lady Margaret Westbrook. Turns out I really can’t type the word Margaret. It’s one of those words that ties my fingers in knots. Management is another. It usually comes out ‘mnageement’  It was a pain in the arse to have to go through each chunk of text after a writing session and fix every Maragret, Maragaret and Mraagret . The hero is called Felix Oliver which is a name I flat out stole from an ex-colleague of mine. Fictional Felix Oliver is nothing like his real-life counterpart, I just wanted the name. Although there’s potential for embarrassment there if my book turns out to be the next Fifty Shades of Grey and the Daily Mail decide to track him down. Fingers crossed that doesn’t happen.