Part of the getting-together socialness of the event, is a ‘Flash Challenge’ which is a writing competition (and not a competitive flashing event as you might have supposed).
Entrants are required to write a 1000 word story using the photograph below of the Manchester Wheel as inspiration. The top three entries will be read out by the authors at the event which is fairly terrifying prospect.
My entry which is titled “The Final Straw” is below.
Let me know what you think in the comments. And give me a shout if you’re planning to come to Smut Manchester on the 15th. It is of course where the very best smutty, social, erotic, got-together people will be. 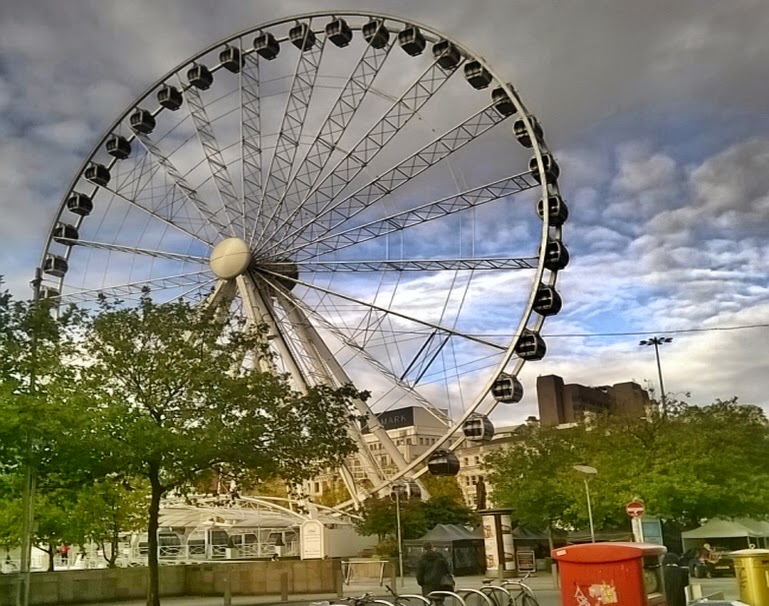 She squinted  slightly and pulled a disappointed face. “It’s not very big is it?”
“What?”
“The wheel. It’s much smaller than the London Eye. Seems a bit daft to come up here and then go on a sub-standard wheel.”
Joel let out a long exasperated breath. “You don’t want to go on it then?”
Katy shrugged. “I didn’t say that.”
“Whatever. I’m not going on it with you if you’re going to spend the whole time comparing it unfavourably with your London one.”
“Our London one. You live in London too.”
“Yeah but Manchester’s where I grew up. That was the point of us doing this trip together. But all you’ve done is put the place down. Manchester bars aren’t as good as London bars. The Manchester Museum isn’t as good as the British Museum.  I’ve had enough of it. I’m going back to the hotel.”
Joel strode off, not too bothered if Katy followed him or not.  She caught up with him and walked with him back to the hotel. When they got back to their room, Joel  grabbed a beer from the mini-fridge and stared moodily out the window at Piccadilly Gardens and the wheel.
“What do you want to do?” asked Katy.
Joel shrugged. He knew what he wanted to do. He wanted to bend Katy over his knee and spank her ungrateful little arse. She’d done nothing but snip and complain since they’d arrived in Manchester.
He had never spanked Katy. Never spanked anyone, in fact, but it was something that he thought about a lot. In great Technicolor detail.
He looked over at his girlfriend. She was beautiful, absolutely stunning. Shame about the bad-tempered look she was wearing. Yet she’d submissively followed him back here without a word. She now seemed to be awaiting his instructions. His cock stirred at the thought of it. Why, he wondered, didn’t he just spank her? Maybe that was what she’d been angling for with her bratty behaviour. It was certainly what she deserved.
He set down his beer and sat on the edge of the bed. “Come here,” he commanded.
“Why?”
“Because I’m going to give you a damn good spanking.”
“You’re going to spank me because I wouldn’t go on the wheel?” Katy asked incredulously.
“No, I am going to spank you because you’ve behaved like a spoilt brat since we got here. The wheel was just the final straw. Now, get over my knee. This will do us both good.”
A tiny, significant second ticked by. Everything hinged on her reaction. She could tell him go to hell. Or storm out. She could, quite feasibly laugh in his face,
But she didn’t do those things. Wonderfully, amazingly, she walked over to where Joel was sitting, her eyes focused on the floor, and laid herself awkwardly over his lap.
He pushed her skirt up to her waist and yanked her knickers to her knees.
“Are you going to use your belt on me, Joel?” Katy asked quietly.
Joel’s cock stiffened at her words. She was so up for this. “We’ll see,” he said, his voice rough with desire.
He spanked her hard and fast covering every inch of her from her waist to the top of her thighs. Her shapely arse changed colour from cream to the hottest hot pink.
Katy let out gasps and squeaks of protest every time Joel’s hand made contact with her flesh. Even though she was wriggling deliciously over his lap, Joel sensed that she wasn’t moving as much as she wanted to. She was trying her hardest to be compliant. To submit.
He stopped spanking and admired the warm fiery glow of Katy’s bottom. He wasn’t through with her yet.  Loath as he was to move her from her delightful position, he knew he wasn’t going to get enough of a swing with his belt with her across his knees.
“Up you get,” he said brusquely and Katy jumped to her feet. “Over the bed, face down. You’re going to get whipped with my belt.”
Katy hesitated. “Didn’t I behave well enough during the spanking?”
“You behaved beautifully.” Joel reassured her. “That’s why you’re only going to get three swats with the belt. If you hadn’t, it would have been much more. Although I’m going to add more strokes if you don’t lie down on the bed right this instant.”
Katy complied immediately.
He brought the belt down across her buttocks three times in swift succession. Then threw his belt to the floor and admired the three bright red lines running horizontally across Katy’s bottom. He didn’t think he’d ever seen anything more beautiful.
He climbed onto the bed and slipped his fingers between her legs feeling the inviting wetness of her delicious pussy.
“You enjoyed that didn’t you?” he whispered.
Katy didn’t look up. She nodded her head which was still buried in the duvet.
“Oh sweetheart, we are going to have so much fun with it,” he said softly, unbuttoning his jeans and releasing his stiff engorged cock. He entered her swiftly from behind, pounding into her to the sounds of her pleasure. She was already so close to orgasm he realised, He wondered if he could make her come just from spanking her alone? He’d like to try.
They lay together afterwards –  a sweaty, sticky, happy mess. “You were right,” she said. “That did do me good. Thank you.”
“You’re entirely welcome. We’re going to be doing it a lot more.” He smacked her reddened backside for emphasis.
“Shall we go on the Manchester Eye, now?” asked Katy, her eyes shining.
“I didn’t think you wanted to?”
“I’m growing fonder of the idea.”  There was a wicked glint in her eye. “You know, if I say anything unkind about it, you can always take me to task afterwards.”
Joel grinned. He rather hoped she would find something unkind to say about it. “Come on then sweetheart. We have some sightseeing to do.”

3 thoughts on ““The Final Straw” A Short Story”