I feel like I should put a *MASSIVE SPOILER ALERT* at the top of this post. The Duke of Burgundy is not the sort of film you can spoil exactly. It’s not a whodunit. It’s not like I’m going to give away the fact that the main protagonist was a secret alien cyborg from the future all along. But I went into this film without knowing anything about it at all and that’s an approach I’d highly recommend. So, if you haven’t seen it, I reckon you should go away, watch the movie and then come back and read the review below. Because, apart from anything else, I do talk about the ending. 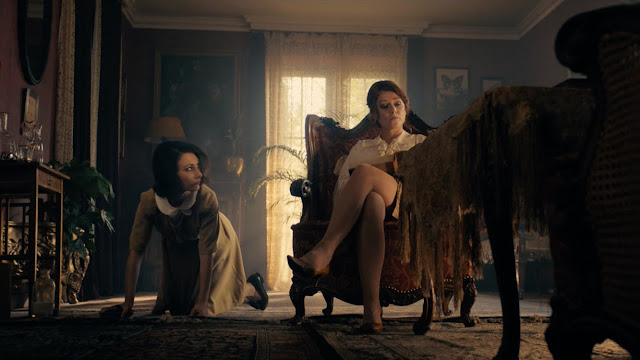 Why do the makers of trailers do that? Deliberately create a trailer that promises a completely different film from the one that it actually delivers? Surely you just end up with with a bunch of disgruntled cinema-goers.

With that out of the way, I want to make it clear that The Duke of Burgundy is a very, very good film. Evelyn (Chiara D’Anna) and Cynthia (Sidse Babett Knudsen) inhabit a slightly dreamlike world set in no particular time period or geographical location. Our first introduction to the two central characters is when Evelyn arrives at Cynthia’s front door to be told, very sternly, that she’s late. “I’m sorry,” says Evelyn. “You will be,” Cynthia replies. Cynthia then rebukes Evelyn for sitting on the sofa without permission before instructing her to clean the study. We see Evelyn scrubbing floors while Cynthia lounges around drinking wine and reading with a haughty demeanour which makes her look every inch the unforgiving Mistress. Evelyn, meanwhile, looks cowed and slightly terrified. She begs permission to be allowed to leave once all her housekeeping duties have been performed. That permission is denied.

It quickly becomes apparent that nothing that we have seen can be taken at face value. Evelyn and Cynthia live together. Far from being abused, Evelyn is having a delightful time. And she is the one who is calling all the shots. The Maid-and-Mistress scenes we have just seen are meticulously orchestrated fantasies of Evelyn’s which are played out again and again throughout the film by the two lovers.

As we see the same scenes being re-enacted throughout the progression of the film, the nuances of the participants’ performances begin to shift. Evelyn may be having the time of her life – scrubbing floors, washing her Mistress’s knickers, enduring some kind of off-screen water-based punishment – but it becomes apparent that Cynthia is struggling with her role as a Domme.

At first, I assumed that Cynthia had originally been up for the D/s lifestyle that she had adopted with Evelyn. (We are, tellingly, never shown the beginning of Evelyn and Cynthia’s relationship. We never get to hear the conversations that led to Evelyn’s extreme submission fantasies being fulfilled.) Then I thought that she had once been into it but had become bored with the arrangement. As the story progressed, however, I understood that being the ‘D’ in a D/s relationship had never been Cynthia’s thing. It was just something that she was prepared to do in order to keep her lover happy.

As Evelyn pushes to take her submissive role further – Human Toilet! Being manacled and locked in a wooden chest all night! That sort of thing! – Cynthia finds it increasingly difficult to be the Dominant that Evelyn wants her to be.

As far as understanding the nature of a D/s relationship, this film provides a very one sided view. Evelyn and Cynthia’s relationship is not a healthy one and the D/s aspects are clearly dysfunctional. We’re mostly watching two frequently miserable people in love with one other struggling to find a way in which their relationship might survive.

Which is annoying for me because that’s the half of the dynamic that I would like to understand better. I don’t really understand what a Dominant gets out of the arrangement. I get where Evelyn is coming from. I can relate to it. Not to the extent she does or the extremes she wishes to take it, admittedly, and her kinks are definitely not my kinks. Mine involve a lot less housework, for one thing. But the bossy sub thing? Yeah, I get it. I’ve mentioned before that all the subs I know tend to be fairly opinionated strong-willed types. We have to be. We are people who have negotiated how to get exactly what we want. You don’t manage that if you’re a bit of a pushover.

Evelyn controls the role-playing between her and Cynthia by means of handwritten cards, giving detailed instructions of exactly how she wants her Domme to behave. Again, Evelyn’s cards are rather more thorough than anything I would come up with. The scenes are scripted to the exact word. Cynthia even has masking-taped ‘marks’ on the floor so that she stands in exactly the right position when reprimanding Evelyn. I have no intention of taking it to that level but I have been known to provide some fairly detailed instructive texts describing exactly what I want during the times I’m ostensibly the one following orders.

There are certainly moments of humour in the film. (In a wry smile kind of way rather than full on hearty chuckling.) There’s a scene where Evelyn and Cynthia have an appointment with a kinky bed manufacturing lady (Fatma Mohamed). Having discussed the options of building a bed in which Evelyn can be restrained while her lover sleeps on top of her, Evelyn is then brought near to tears with frustration when she realises that there’s no way that such a bed can be manufactured in time for her birthday. Wracking her brains for a way to keep her customers happy, the carpenter says “Would a human toilet be a suitable compromise?” Evelyn’s face lights up and her look of excitement and joy is wonderful to behold.

(Although, what was up with Kinky Bed Lady telling her clients that she had recently supplied a similar item of furniture to someone else in the neighbourhood and supplying enough details that Evelyn and Cynthia could easily work out who she was? What way is that to run a kinky bed business? Have you no respect for client confidentiality? Surely the Number One rule in the Bespoke Furniture For Perverts business is absolute discretion.)

The admissions of infidelity that occur when Cynthia finds out that Evelyn has been cleaning another woman’s boots are also a moment of bittersweet comedy. They just sound so absurd. “There was just some scolding. She said a few harsh words. That was all, I swear!”

Which makes Cynthia’s increasingly faltering ability to meet those needs all the more heartbreaking. In one key scene, Evelyn demands that Cynthia talk dirty to her while she masturbates. Cynthia attempts to start the conversation by telling Evelyn how much she loves her but that isn’t what Evelyn wants. So Cynthia gives Evelyn what she wants. She tells her that she’s her maid, that she belongs entirely to her, that she must do exactly what she’s told or else she’ll be punished. Evelyn keeps pushing. “More, more!” she says. And Cynthia falters. A look of panic crosses her face as she says “I don’t know what else to say.” “Just go back to the beginning” Evelyn tells her. So Cynthia tries her hardest, tells Evelyn what she needs to hear in order to reach her climax. Then post-orgasm, Evelyn tells Cynthia “Next time, try to do it with a little more conviction in your voice.” For fuck’s sake, there’s really no pleasing some subs.

The film’s ending is slightly ambiguous. Acknowledging her partner’s distress in having to enact the role of her Domme, Evelyn reassures Cynthia that they don’t have to do it, anymore. That she would be content with a vanilla relationship with her. Because she loves her and anything else is just an extra. However, the very last scene of the film is the exact same Mistress/maid scenario with which the film opened. I did wonder if this was a flashback to earlier, happier times. But, you know, I don’t think this film actually had any flashbacks. It felt like there were because of the way the pair re-enacted the same scenes over and over again. But I think the film was actually entirely chronological. I would need to watch it again to check.

My interpretation (and other cleverer and filmier people than me have agreed with this when I have discussed it with them) is that Evelyn and Cynthia’s attempt at a non D/s relationship failed. Evelyn couldn’t live without it. Cynthia couldn’t deny Evelyn the thing that made her so happy.

I would absolutely recommend that everyone watches this film. And not just kinky people. It was hugely critically acclaimed. It’s beautiful and sparse and exquisitely shot. The soundtrack sends shivers up your spine. Regardless of whether you’re sub, Dom or entirely oblivious to the fact that people get up to these sorts of shenanigans, you will find yourself drawn into the claustrophobic, slightly unreal world of two people who are in love and who are desperately, sometimes clumsily, trying to make that love work. Just don’t go expecting a full-on wankfest chock full of lesbian sex, bondage and watersports. Honestly, it’s not that kind of film. 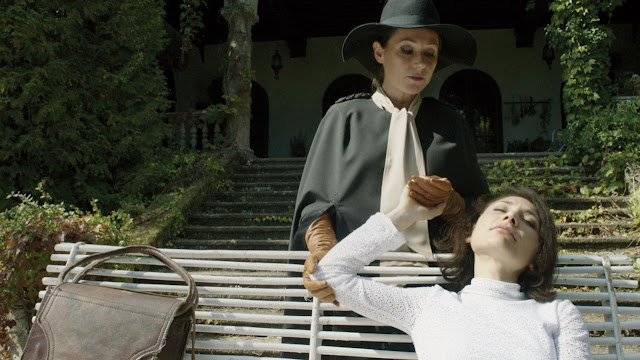 2 thoughts on “The Duke of Burgundy”