This is my ‘T’ post for the Spanking A-Z Blog Challenge. “What’s that?” you ask. Check out my page here for more information and a list of all the wonderful bloggers taking part. 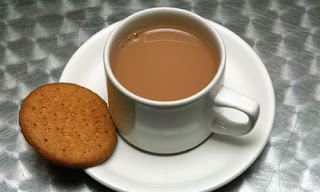 I mentioned in an earlier post that tea is my number one fetish. I’m not even joking about this. It’s on my FetLife list of fetishes and everything.

I hang about with a lot of Americans online and, you know, a lot of the cliches you’ve been given to understand about British people aren’t true. We don’t wear bowler hats all the time. We don’t greet one another by saying “God save the Queen!” Our teeth are fine.

But being obsessed with a nice cup of tea? Oh hell yes. My sister-in-law had to do the UK Citizenship Test  which consisted of a bonkers load of questions that most of us who were just born in this country would struggle to answer. I reckon the best way to do a UK Citizenship test would be to ask prospective residents if they want a cup of tea, If they say “Oooh, I could murder a cup of tea right now, I’m parched.” then we can immediately welcome them into the country with open arms.

We took her at her word and posted a huge box of  goodies including loads of very English sweets like clotted cream fudge and rhubarb and custards. We also included tacky Royal Family souvenirs, pork scratchings and a jar of Marmite. And a lovely selection of tea, obviously.

And because I have no confidence that Americans have any idea about how to make a cup of tea, I very helpfully included the following flow-chart. 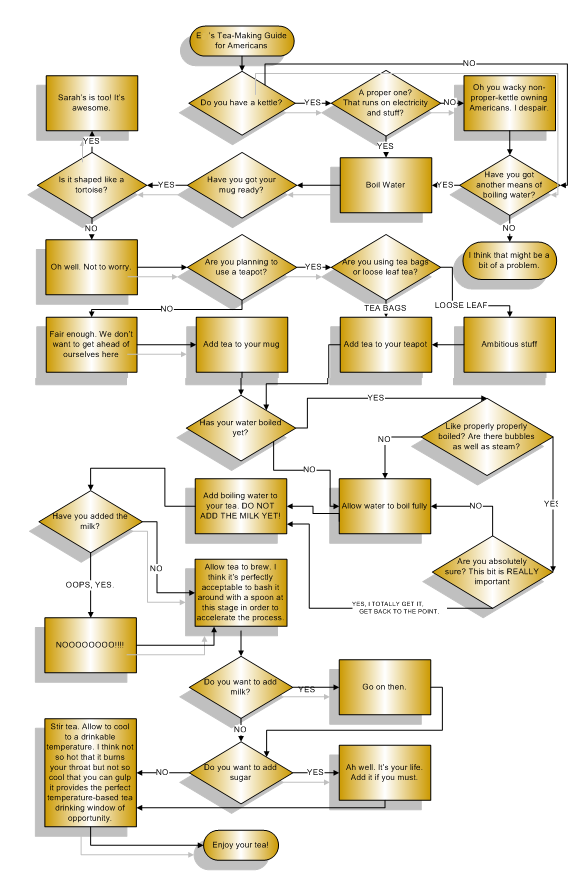 Unfortunately, I didn’t include any instructions for the jar of Marmite which led to the Support Manager attempting to tuck into it with a spoon. And then declaring it disgusting, obviously. Because that’s not how you do Marmite. Hot buttered toast is essential.

A year or so later, a young lady joined the Support team who claimed to have never made a cup of tea in her life. Clearly, this wasn’t an adequate excuse not to take part in the tea rounds so I printed out the above flowchart to give her some guidance. Did it help, you ask? Did it, bollocks. You know the bit she messed up on? The ‘making sure the kettle had boiled adequately’ bit. The importance of freshly boiled water is mentioned like FOUR TIMES in my flowchart. She just assumed the water that was already sitting in the kettle was ‘hot enough’ and used that. She was just lucky that I wasn’t her Line Manager. I would have definitely have brought that up in her Performance Review.

I’m not saying tea is the MOST IMPORTANT THING IN THE WORLD, you understand. That would be crazy. It definitely makes the top three, though.