There is a scene in Steven Shainberg’s Secretary where E Edward Grey speaks to Lee, his secretary and submissive, about her history of self-harm. “Is it that sometimes the pain inside has to come to the surface?” he asks her before instructing her to stop doing it. “You will never cut yourself again,” he tells her. “You’re over that now. It’s in the past.” 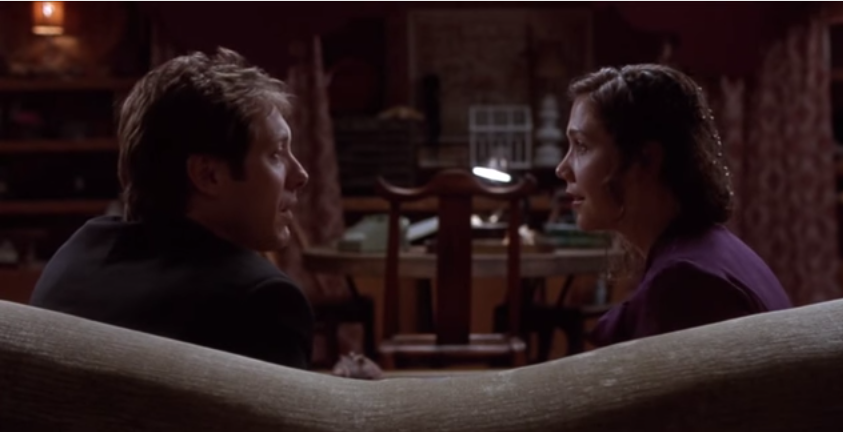 So instead of self-harming, Lee submits herself to Grey’s command, discovering a world of willing submission and bondage play. The implication is that Lee’s desire to hurt herself and her desire to be punished by Grey are two sides of the same coin. She cures herself of one by fully embracing the other.

I am not sure I accept the link.

I extensively self-harmed between my mid-teens and mid-twenties. My arms and hands are permanently marked with the small round burn marks and long thin scars which serve as a physical manifestation of the clinical depression I have lived with for the last twenty-five years. I manage my depression now with the help of regular medication and professional therapy a couple of years ago which enabled me to re-think the way I responded to depressive episodes in my life.

For a very long time the incapacitating pain of depression was compounded by feelings of guilt that I should be feeling like this in the first place. What do you have to be unhappy about? I would ask myself. I’d badger myself with the things I should be thankful for and how so many people in the world had a much worse time of it than I did. My therapist helped me to break the cycle of adding to my depression by hating myself for daring to have it in the first place. I don’t need to work out why I feel the way I do. I just need to accept that I do and determine where to go from here.

That has been a part of my life even longer than the depression has. Certainly from the age of nine I was maintaining a kind of mental scrapbook in which I would store snippets of books and films – like Oliver in the 1968 musical being bent over a table by Fagin his coat tails flipped out of the way for a beating he doesn’t receive, or an episode of Nanny in which three sisters are regularly hit across their palms with a ruler by their stern governess. I would snip and rearrange these images until I had something I liked and replay it again and again in my mind. I wasn’t sexually aware; I just knew it was something that I liked to think about.

As I got older and realised that my obsession was in fact sexual in nature, I naturally assumed I was some kind of freakish pervert. Most of my masturbation fantasies didn’t even involve sex. How weird was that? Then I found out about Sadomasochism. That must be what it is, I thought and, as the world wide web wasn’t around yet, sought out books and magazines full of whips, chains, leather masks and women being restrained in a  variety of unnatural and uncomfortable looking positions.  There was a horrible sense of disappointment when I realised that, no, that wasn’t right either.  I felt like I had I had missed another memo. I was weird even amongst the weirdoes. All I wanted to see was girls having their bottoms spanked.

Interestingly I feel that I have really only come to terms and fully accepted my kink with the last few years which coincides with my acceptance of my clinical depression.

Yet I still remain unconvinced that the two things are connected.

I don’t doubt that the two things often coincide. But then they would. Self harm is not uncommon. Neither is being a bit kinky. The two things are often going to turn up together in the same person. For me, they are just two separate things that make up who I am. Like my vegetarianism or love of Disney movies.

I am not dismissing the idea though. I may have turned forty this year but I am still learning all the time about what it means to be me. In fact, I anticipate it to be a life-long project. I understand – and like – myself better today than at any other point in my life so far. But I am very, very long way indeed from knowing it all. Maybe the dodgy bit of wiring inside my head that sparked the need to self-harm is linked to my fascination with spanking.

Regardless of whether they are in fact two sides of the same coin as they were for Lee in Secretary, the most important thing I think is that I continue to accept myself as I am. Emotionally messy, slightly scarred and my own particular level of kinky. It’s all me.

9 thoughts on “Submission, spanking and self-harm”