I mentioned the other week how you really don’t get a lot of spankings in mainstream movie. It’s not like I expect there to be as much spanking on screen as there is, say, inside my head. That wouldn’t leave enough time for all the car chases and robot battles and stuff. Not surprisingly, I tend to be drawn to films where I know there is going to be be some kind of spanking and below are four such films which I’ve seen (and seen all the way, through, you understand. I’m not just youtube-ing the spanking bits) and my thoughts on them. Turns out my overriding response to spanking in the movies is one of slight disappointment. They’re not as satisfying as books, that’s for certain.
So here they are in no particular order (well they are in a particular order, I suppose. They’re in the order I wanted to talk about them Just not in chronological order or anything.)
McLintock (1963) 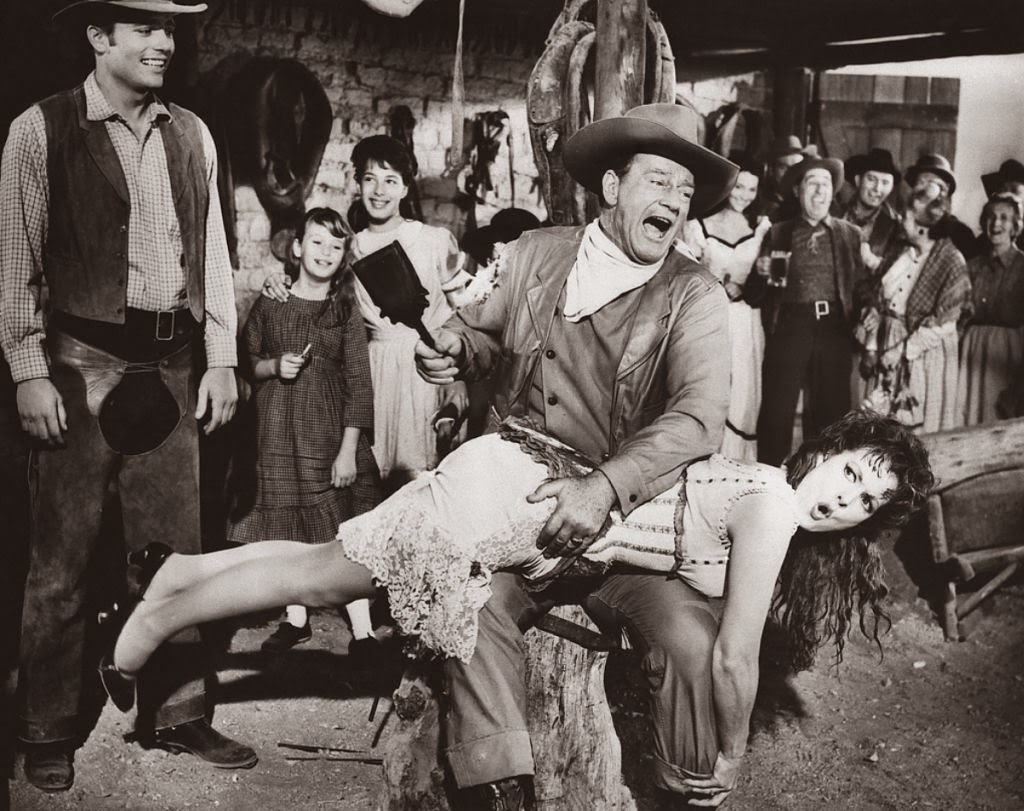 John Wayne spanking Maureen O’Hara must be one of cinema’s most famous spankings. It’s right there on the DVD cover and everything. It was a pretty ungentlemanly spanking though. McLintock pursues his ex throughout the town before wrestling over his lap in front of the whole townsfolk and spanking her with a coal shovel. A coal shovel! Why on earth would you even choose to use that as a spanking implement? It’s non-springy, it has a small surface area, it’s made of metal for goodness sake. If you were to compile a list of every possible type of object in order of their suitability as a spanking implement (and who knows I may just do that at some point), with razor strops, belts and ping pong paddles at one end and meringues, diamond rings and glass eyes at the other, then a coal shovel would definitely be closer to the rubbish end.
Luckily for McLintock, the spanking has the desired effect and the two of them are happily reconciled at the end of the movie. So, yeah, it worked. But maybe next time you could do it with a bit more finesse, mate.
A Dangerous Method (2011)
Keira Knightley and her extraordinary accent are patients of groundbreaking psychoanalyst Carl Jung. She suffers from hysteria and Jung’s revolutionary new ‘talking therapy’ reveals her intense desire for physical punishment. Jung encourages her to pursue her plans to become a doctor and she encourages Jung to have an affair with her in order that she might have a 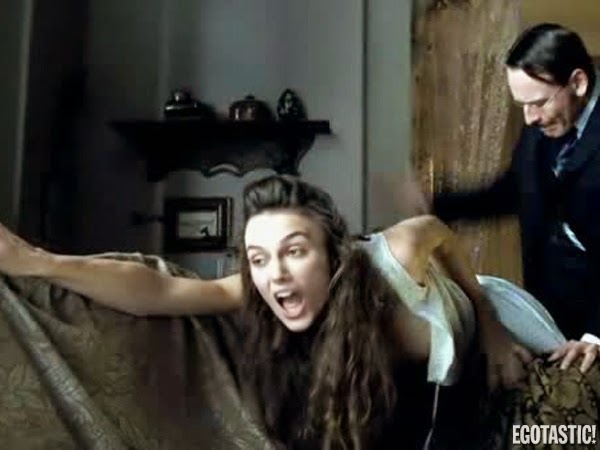 better idea of sexuality. Jung hums and haws for a bit because, you know, she is his patient and he is already married and everything but eventually reaches the decision that, yes, he would like to have sex with the pretty girl. Spanking inevitably ensues. The spanking scenes are not particularly engaging though. I think it’s because they are only shown in isolation with no build-up or aftermath. We know that being punished excites her but we’re never really shown what Jung gets out of it. Does he enjoy spanking her or is he doing it in the spirit of scientific enquiry? It’s left pretty unresolved because, being based on a true story, things don’t get all neatly wrapped up but events just sort of go on for a bit and then stop. Like life. The best quote in the film comes from maverick psychoanalyst who counsels Jung when he’s wavering as to whether he should accept his patient’s offer. “I can’t understand what you’re waiting for. Just take her to some secluded spot and thrash her to within an inch of her life. That’s clearly what she wants. How can you deny her such a simple pleasure?”

Blue Hawaii (1961)
Now I’m not going to be rude about Elvis Presley. The man’s the undisputed King, for goodness sake, he influenced everyone in music worth listening to for generations after him. Half of my Christmas Spotify playlist is Elvis Presley because at his most cheesy , he’s still Elvis and 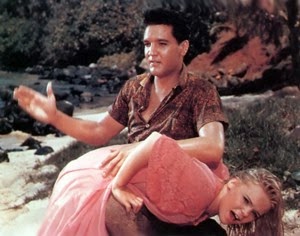 there’s nothing more festive than hearing him croon “O Little Town of Bethlehem”. Still, when all’s said and done, he did make some truly terrible films. Blue Hawaii is one part Hawaii tourist board promotion, one part music video and one part Elvis just phoning his lines in. Although it does come with a nice spanking garnish so that’s a bonus. Bizarrely, the girl who gets taken over the knee by Elvis isn’t even his love interest in the film. She’s a spoilt brat that Elvis needs to take care of as part of his tour guide duties. And by ‘taking care of’ we mean being bent over his lap and spanking soundly, of course.

Jenny Maxwell who was on the receiving end of the spankings said that they were all for real and that the scene took several takes to get right. It’s a fun scene that is only marred by the rest of the film being absolute rubbish. Nice songs though.
Secretary (2002)
This film is a bit of a weird one. Sure, it’s all fun and games to start off with spanking over the desk, and saddles and carrots and arm yoke-things. Maggie Gyllenhaal plays Lee, secretary and submissive to James Spader’s E Edward Grey (Hey, he’s called Mr Grey like that other suit 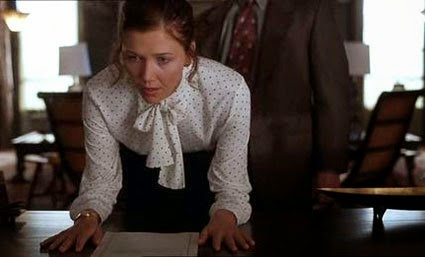 wearing dominant. Totally didn’t realise that before) but things getting a bit bleak as the story progresses. Culminating in Lee being instructed to place her hands on his desk and not move until Grey comes back for her. He leaves her for three days while she becomes the focus of her messed-up family’s ministrations and the object of media attention who stand outside the building reporting on her ‘hunger strike’. I think the ending of the film is supposed to reassure us that the couple work everything works out OK for the couple but I didn’t really feel convinced by it. I would like to have seen some evidence that they go on to have the happy BDSM relationship we want them to. A nice over-the knee spanking at the end would have improved the film immensely. Although now I come to think of it, that’s probably true of all films.

8 thoughts on “Spanking in the Movies”

When Movie Posters Lie About Spanking