So last month, I participated in Celeste Jones’s Spanking A2Z challenge. As required, I produced blog posts for ALL the letters of the alphabet from A to T.

Only, you know what? Apparently, there are more letters after T in the alphabet. Who knew? I blame the British education system. (Although to be fair, you’d have thought that the ‘Z’ in #spankingA2Z would have provided my first clue.)

Obviously, I can’t move on with my blog (or my life) until I have dealt with the rest of these pesky letters. So hold tight, readers, this is going to be a whirlwind journey through letters U to Z.

Seriously, people, what is the deal with unicorns? Obviously, I am missing out on 95% of the appeal of unicorns by not being a pony-ish/horsey sort of girl. Even though I live in Surrey and one in every three vehicles here is a horsebox. If you don’t have a “I stop for horses” bumper sticker on the back of your car, you may as well be telling your fellow road users “I mow down horses and their riders for shits and giggles”.

I still don’t get the unicorn thing. Why does sticking a ruddy great weapon on the front of a horse’s face make it more whimsical and magical?

Would a hamster be more adorable if it had a chainsaw attached to its nose? Would you like rabbits better if their ears could double up as ninja death stars? What about if a goldfish could shit incendiary devices? Or if cats had lethally sharp weapons springing out of their paws at a moment’s notice? Oh wait, cats actually do have that. And that shit’s real. Cats win. They always do.

There was a thread on Mumsnet recently complaining that a school sex education talk told pre-pubescent girls they will grow hair on their vaginas when they hit puberty. They won’t. Women don’t have hair on their vaginas. The vagina is the genital tract. It’s all internal. Women have hair on their mons pubis and their outer labia. Hell, if they’re like me, they have hair from just below their belly to halfway to their knees if they don’t choose to do something about it.

If you’re talking about the external stuff, then why not just refer to the vulva? That covers the mons pubis, the inner and outer labia, the clitoris, the vaginal opening and the external urethral orifice. The whole shebang as gynecologists (probably) say.

Germaine Greer advocates using the word ‘cunt’ as a term which encompasses all the female sex organs. I love the word ‘cunt’. I try not to use it too often as I like to keep it for special occasions. Like having a best set of crockery that you only get out for special visitors. ‘Cunt’ isn’t synonymous with ‘vulva’ anyway.  ‘Cunt’ includes the vagina but excludes the urethra. (I feel like there’s a Venn diagram just waiting to happen, here. And I do love a Venn diagram.)

Embrace the word ‘vulva’. It covers a multitude of terribly interesting areas. Although if you do want to keep referring to ‘cupcakes’, ‘flowers’ and ‘mimsies’, I’ll try not to judge you.

Just don’t advise your daughters to shave their vaginas. That could get really messy.

I could have gone with Westbrook for ‘W’ but, you know, you’ve probably had enough of that sort of thing.

Enjoy a snippet from Renee Rose’s “The Westerfield Affair” instead. Because goodness knows, I never talk about her on this blog.

“Are you going to spank me again?”

His mouth twitched with what appeared to be humor. “No.”

She bit her lip, trying not to smile.

“We should not be in here alone.”

“No,” he refused flatly.

She rolled her eyes and reached up, plucking the end of his cravat and yanking it, so it came untied. It was a bold to tease him now, considering he’d shown no compunction in turning her over his knee, but his eyes crinkled with amusement and he smiled down at her.

You know I’m not even slightly apologetic for more Renee Rose-ness on my blog, don’t you?

X
Big X, little X, what begins with X? Well, nothing much does, does it? X is a very much a letter for coming at the end or in the middle of words.
Even Dr Seuss acknowledges this in Dr Seuss’ ABC. 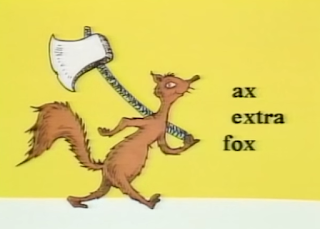 And let’s face it very few of us are called Nixie Knox. (I know three Nixie Knoxes, tops.) So it’s just the ax, fox and people-who-want-to-score-well-in-Scrabble contingent who need to worry about it.
I wrote about X-rated movies for my 2014 X blog post but I really can’t think of another X-word that I want to write about on my nominally spanking-themed blog. X-rays? Xenophobia? Xylophones?
Actually, it occurs to me that xylophones are massively over-represented in their importance to impressionable young children. So are zebras. Almost 8% of alphabet-themed wallcharts consist of xylophones and zebras. Children must grow up thinking those two things are going to be vastly more significant in their lives than they actually are.
Yes!

Of course, the most famous “Yes!”-based orgasm scene in popular culture isn’t even a real orgasm. Still a marvellous clip, though.


I’ve never understood the trope about shouting out the name of the wrong lover in bed. Do people really call out their sexual partners’ names at the point of climax? I have never done it. Shouting out “Nigel! Nigel! Oh, Nigel!” would just seem kind of weird and awkward in the circumstances.

I’m sure I do say “Yes!” a lot, though. Apart from anything else, it’s positive reinforcement. You don’t want to be all negative if a gentleman is doing his utmost to pleasure you. There’s a scene in the movie This Year’s Love where Ian Hart is attempting to pleasure Jennifer Ehle. She dismissively says “No… no… not like that” in response to his efforts. Well, that’s not going to get the job done, is it sweetheart?

Far better to say “Yes” to the best bits. Gives a bloke a bit of feedback. Which I find encourages more “Yes”s. Leading, of course, to “Yessssss!”, “Yessssssssss!” and “Oh, my fucking god, Yesssssssss!”. Culminating in utter speechlessness when it all becomes much too marvellous for words.

You’ve all seen a zoetrope, right? It’s a fancier version of the flip-book and was briefly popular in the nineteenth century. My internet-age daughter had her mind blown by the ones at The Museum of Childhood in London when she was little.


Zoetropes were pretty quickly eclipsed by film. Why stare through a tiny slit in a rotating drum when there’s actual proper moving images on screen? Of course, the interesting thing is that film is based on exactly the same principles as the zoetrope. Which is that our brains are quite easily fooled. Show me a quick succession of moving images and my brain will happily fill in the gaps to ensure that it looks like a smooth progression of movement happening in front of my eyes.

Happily, the art of creating zoetropes is still alive and well. Both Studio Gibli and Pixar have created 3D zoetropes in order to demonstrate how animation works.

Just watch the clip below and tell me those characters aren’t moving. I refuse to believe otherwise. Actually, why did they even need to build a zoetrope? Why not just get the characters from Toy Story to walk around independently. They can totally do that. It’s not like they need those tricks. The Toy Story films were fly-on-the-wall documentaries, right?


So there you go. I may not be able to claim that I completed the #SpankA2Z challenge this year. What with being three weeks behind schedule and everything, But at least I can move on with my life, now.