I went to see Into The Woods this week which despite ticking every one of my movie must-see boxes (Re-interpreted fairytale / Sung-through musical / Has Johnny Depp in it) was all kinds of terrible. A nineteen hour mishmash of incomprehensible plot and terrible songs. Clearly this is just my opinion. Other people (people whose opinions on films I have hitherto had the utmost respect for) seem to think it rather good. (Everyone seems to hate the Annie remake as well which I have been heartily recommending to all and sundry. I feel like I am getting musicals All Wrong at the moment.)

There was one song in Into The Woods I quite liked. This was ‘Agony‘, a tongue-in-cheek number sung by Cinderella’s and Rapunzel’s princes. It seems quite neat that Disney is parodying the cliched image of its own fairytale princes until you remember that they’ve done that before, far, far better in Enchanted.

I don’t think Disney princes really need taking down a peg or two anyway. It seems to me that they’ve always had a bit of a rough time of it. Being continually upstaged as they are by those attention-seeking princesses of theirs. The poor prince in Snow White doesn’t even get so much as a name, let alone a character arc.

Prince Charming in Cinderella fares little better –  existing as a plot device rather than any kind of fully formed character. At least Sleeping Beauty‘s Prince Philip got a real name. Even if it is a name he has to share with the Duke of Edinburgh.

When Disney had its second animation wind in the 1980s, the boys started to get more of a look-in with The Little Mermaid‘s Prince Eric getting some actual lines and personality traits beyond ‘marries the heroine’, He’s probably the first Disney Prince that you’d want to go for a pint with.

And in Beauty and the Beast, our prince shares not only the billing with his female counterpart but also has an equal share in screentime. The prince is for once allowed to have a fully-formed personality. It is, however, a terrible personality. He’s short-tempered, abusive and really quite stupid. Fine figure of a man though. Who wouldn’t want to share a bed with an eight foot fur covered beast like him? It’d be like sleeping with a giant cat. Or a bear.

It’s such a shame when he gets magicked back into a puny boy-child at the end of the movie. He loses so much girth  generally that I can’t help feeling his transformation would be a massive disappointment for a lady.

And now with the most recent crop of Disney movies, we finally have some Disney princes worth getting excited about. Well, not so much in Frozen where its two male leads, Christof and Hans, are -in the case of one – repeatedly described as ‘smelly’ and – in the case of the other – (spoiler!) a lying bastard.

However, The Princess and the Frog‘s Prince Naveen is rather lovely and Tangled‘s Flynn Rider may be the hottest and charmingest Disney Prince* the studio have come up with yet.

Of course not all male leads are princes. And not all full-length animated films are Disney. There’s a whole panoply of male cartoon love interest out there. Below is a list of my top five male animated characters based on – what exactly? Fanciability? Wait a minute, am I objectifying these poor fictional characters? You know I think I might be. I’m a monster. 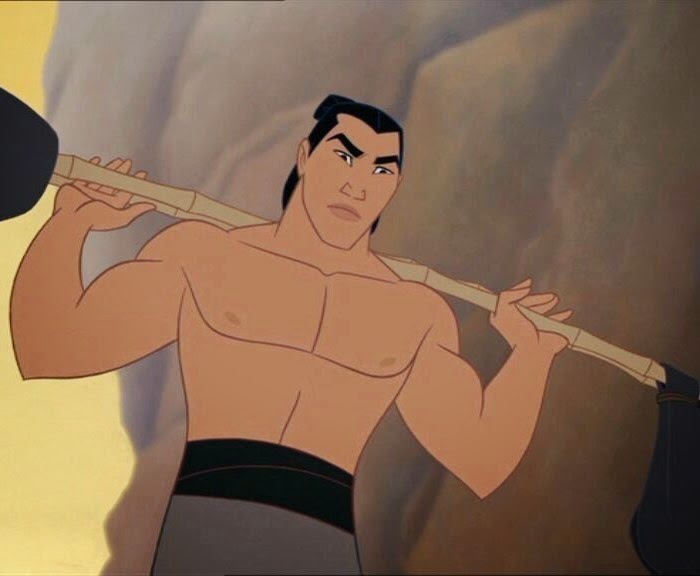 It’s easy to be the hottest man in the movie when the rest of the male characters either look like this: 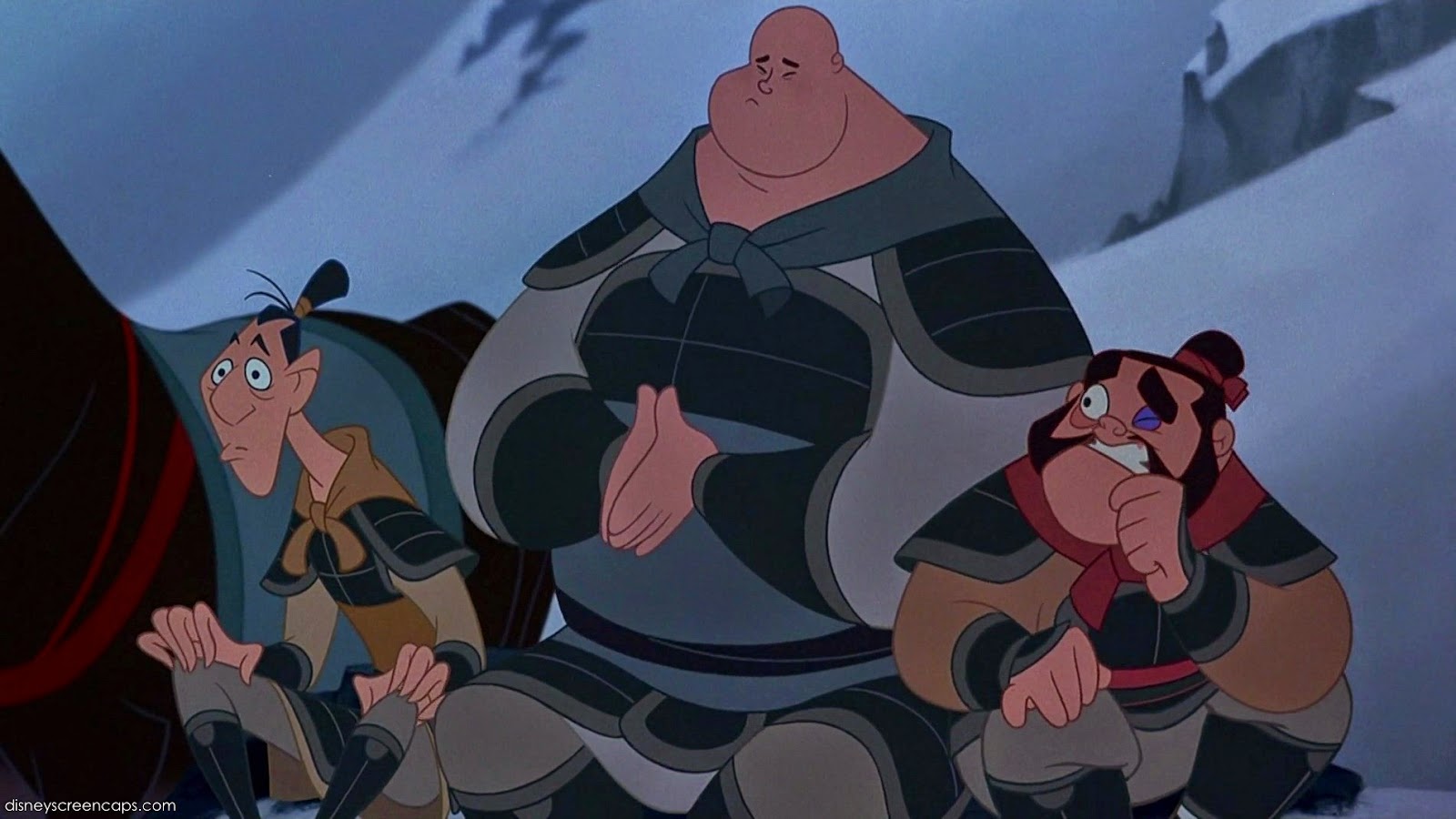 Or are a woman in disguise. Or a lizard.

And to be honest, Li Shang doesn’t come across all that sympathetically in the early part of the movie. He’s all moany about the crippling weight of his privileges and the job he got through rampant nepotism. Poor baby. But you know, I grew to like him anyway. He trains up the troops, builds up a bit of a bond with Mulan and refuses to execute her when he finds out her terrible secret. (And you know a reluctance to kill me in cold blood is one of my top ten attributes in a boyfriend.) By the end of the movie, far from being an arrogant bellend, he’s a suddenly nervous suitor, so tongue-tied around the girl that he fancies that he blurts out nonsense. And that’s always kind of sexy.

Aaron from The Prince of Egypt 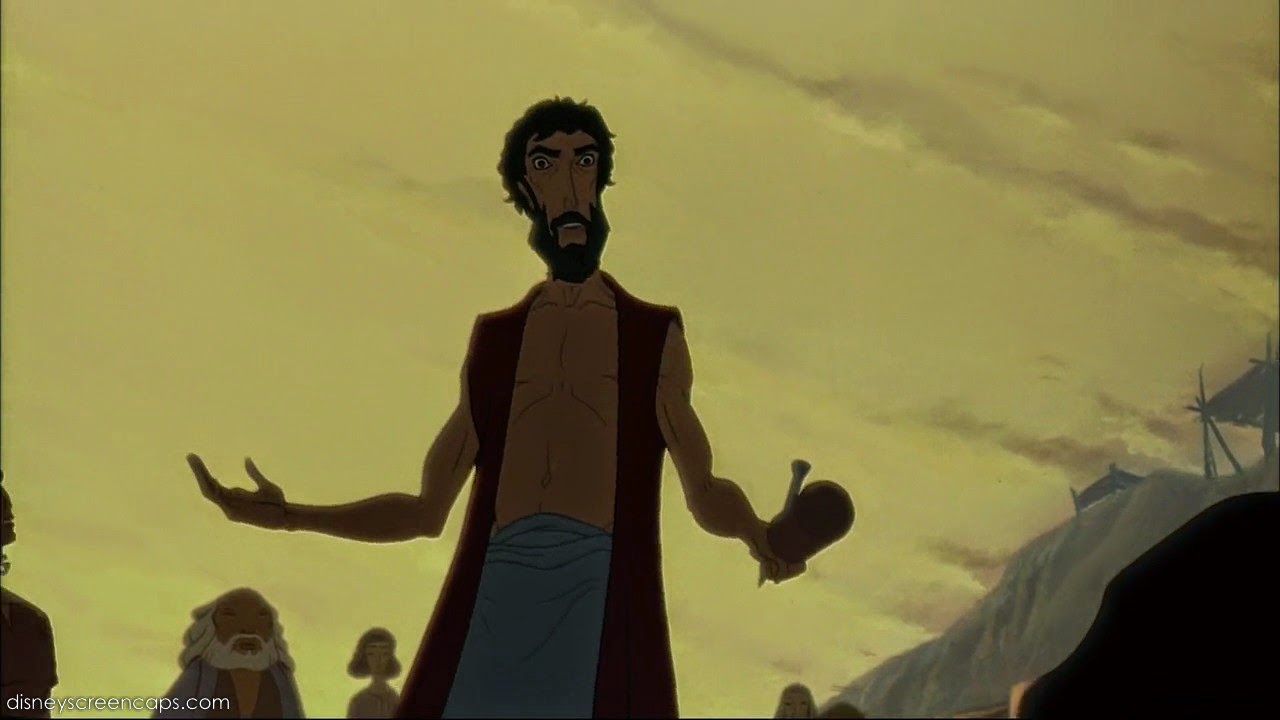 See, you’d be spoilt for choice for characters to objectify in DreamWorks’ biblical epic The Prince of Egypt what with sexy Moses and sexy Rameses and everything, But it’s Moses’s brother Aaron who gets to make the list. Partly it’s the beard but mostly it’s because the character, voiced by Jeff Goldblum, is just basically Jeff Goldblum in animated form. I could listen to Jeff Goldblum say lines like “You did not see because you did not wish to see” in Jeff Goldblum’s voice all day.
I’m a godless heathen myself, but I do really like this re-telling of the story of Exodus. I like their commitment to the original biblical source material and I like the fact that they choose to end the story shortly after the parting of the red sea when things do actually seem a little upbeat for the Hebrews. Because, as I understand it, God’s chosen people really did have a terrible time of it for quite a while longer.
Flynn Rider from Tangled 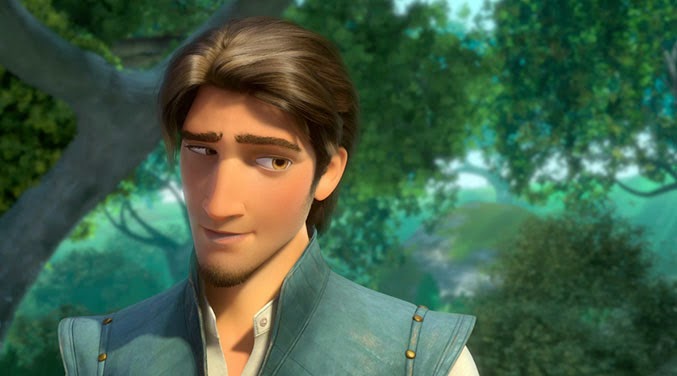 He got a brief mention earlier, but lovely bad-boy-turned-good Flynn Rider really does deserve a place on this list. The dashing, dishonest outlaw has some excellent one liners, a dangerously powerful smoulder and a refreshingly dissolute attitude to going out on the lash. “The party lasted an entire week, and honestly, I don’t remember most of it.”
The makers of Tangled clearly tried to make a movie that would appeal to boys as much as it would to girls with its strong male lead, horse-mounted chase sequences and derring-do. Presumably that was why they titled the film as they did rather than calling it Rapunzel. Unfortunately nobody told the marketing division of Disney this and when the merchandise hit the stores it was the usual Disney princess pink glittery crap sending a clear message to its male audience members: “This film is not for you. It is for people with vaginas. Go and watch that one with planes in it.” 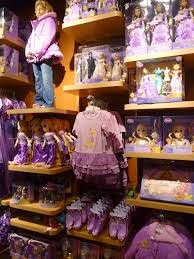 Tulio from The Road to El Dorado 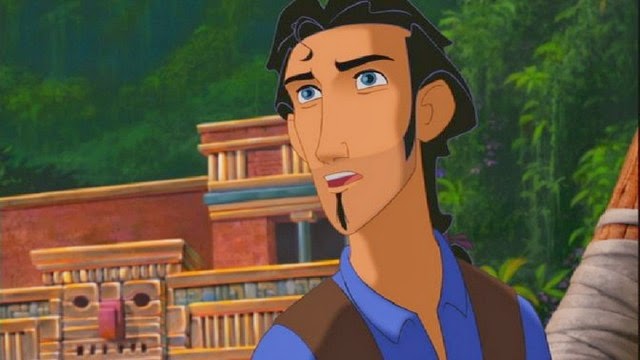 Dreamworks’ The Road To El Dorado didn’t get the recognition it deserved which is a shame because it really is a lot of fun. Plus it has one of animation’s sexiest male leads in it. (The second sexiest animated male lead, actually. The number one spot goes to the next entry on the list. This is basically a countdown, you see.)

Spanish conmen, Tulio and Miguel (“Miguel and Tulio! Tulio and Miguel!”) go in search of El Dorado, the mysterious city of gold and in the space of one musical number, succeed in finding it. Well, that was easy. What’s next, chaps? Ah, fighting over the pretty girl. I see, Carry on.

The pretty girl in question is Chel and I don’t want to spoil anything for you but Tulio’s the guy she goes for because of course he is. Who wouldn’t favour Tulio the sex god over floppy-haired Kenneth Branagh? The scene in which Chel gives Tulio a massage may be the most sexually suggestive scene in any animated film aimed at children ever. And you know me, I pretty much keep a spreadsheet of that sort of thing.

Dean from The Iron Giant

So who’s number one in my list of imaginary cartoon boyfriends? Why it’s Dean, conceptual artist, Beatnik and understated day-saver from Brad Bird’s awesome adaptation of Ted Hughes’ book The Iron Man. (They changed the name to the Iron Giant for the movie because apparently there’s some other dude called Iron Man and they thought people might get confused.)

Set in the 1950s, the movie reflects the Cold War paranoia of the time, when children were encouraged to ‘duck and cover’ as a way of avoiding any pesky nuclear bomb blasts.

Nine year old loner, Hogarth, befriends fellow loner, cool sexy Dean who helps him hide his giant killer robot because that’s just the kind of cool guy Dean is.  Plus he ends up with Hogarth’s mum and I am always biased towards fictional characters who date single mums. Like it gives us non-fictional single mums hope. One day I too will bag my own 1950s Beatnik sculptor, friend to squirrels, kooks and giant killer robots everywhere.

So there you go, that’s my possibly-quite-sexist-if-you-think-about-it-so-probably-best-not-to-think-about-it list of the hottest guys in animated movies. I’ve kept the list to Disney and Disneyish-type American movies aimed at children. There is a whole world of animation from other countries, particularly Japan, which I haven’t even attempted to cover because, well you gotta have rules man. Otherwise it’s just anarchy.

So let me know what animated character you fancy most? Not least just to reassure me that I’m not the only person over 9 who thinks about these things. My daughter fancied college-age Andy in Toy Story 3 so, you know, I’m definitely not the only weirdo out there. Let me know your choice of fairytale prince in the comments below. As long it isn’t either of the princes from Into the Woods, of course. Because if it is, I shall have to mock you. 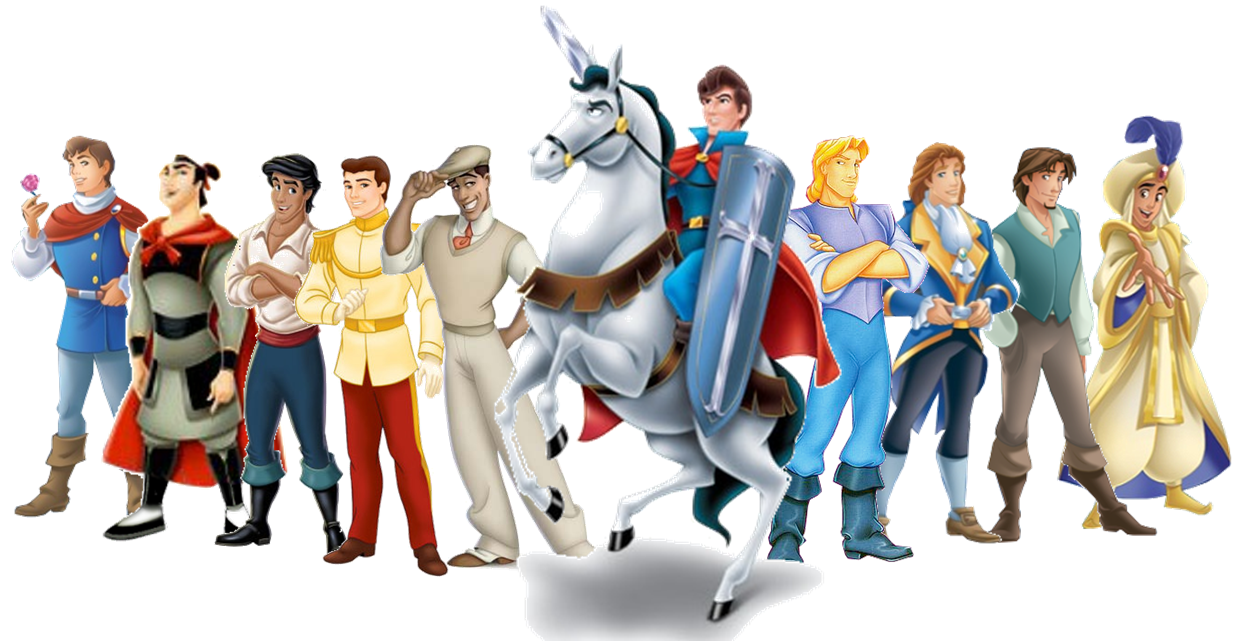 * Or you know, prince-to-be. If Cinderella can count as a princess, Rider can be a prince, I reckon.

11 thoughts on “Some Day My Prince Will Come”