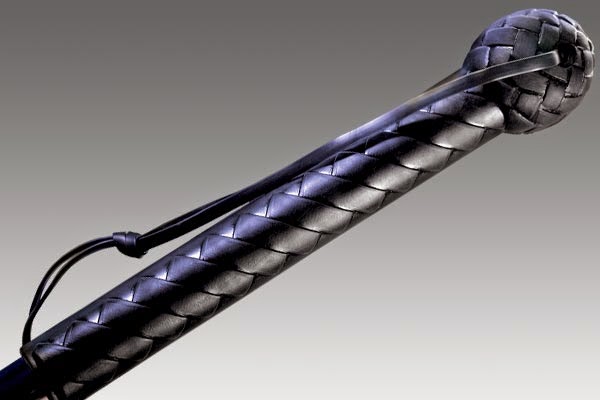 I was introduced to a sjambok for the first time last Friday. I knew what it was immediately. I have been aware of the sjambok since I was in my mid teens when I read an Amnesty Internationaladvert in the newspaper about torture methods. The advert text mentioned beatings, canings and whippings. I had a very guilty wank over it. (Because human rights abuses = not OK. Just so we’re clear.)
The sjambok was the one thing mentioned that I wasn’t already aware of and I had to go and look it up. It’s a hippo/rhino hide or plastic whip used by South African police. So you know, not nice. Or at least not nice in those circumstances. I had only the briefest of introductions to it the other day. I would very much like to revisit.
Getting turned on by the wrong things is very much an occupational hazard for a kinkster.  (In fact, come to think of it, ‘getting turned on by the wrong things’ is probably the dictionary definition of a pervert.) Torture and judicial corporal punishment are inexcusable. I am the leftist of leftwing hippy liberals. I firmly believe that there is no possible scenario in which torture should take place.
Except in the bedroom, obviously.
Amnesty International have a bit of a habit of accidentally turning me on, it seems. Last year there were a series of London Underground adverts which provoked a reaction in me that was somewhat different from the horror and outrage they probably anticipated.
I’m not making light of human rights abuses. I’m the fun-sucker who, when my daughter and I did the London Dungeon felt the need to point out that while it’s all well and good to laugh at Medieval torture implements, that sort of shit is happening all over the world right now.I am the same about cutesy depictions of pirates. Honestly, I’m no fun at all.
But regardless, I am also a lifelong spanko who gets immensely turned on by being bent over and belted and caned and whipped. And sometimes I respond at a fairly physical level to things that I know shouldn’t be turning me on at all.
It’s like when I read Kathryn R Blake’s excellent Corbin’s Bend book A Simple Misunderstanding. The heroine, Elly, is being abused by her husband. But the thing is, a lot of the abuse he meted out was quite BDSM-y in nature. Which in a BDSM-y type book (albeit a Domestic Discipline one at the sweeter end of the kink) is problematic. If Arthur had been smacking Elly round the face or punching her in her kidneys, then it would have been very straight-forwardly domestic abuse. But he didn’t just do that. He tied her up. He whipped her. He inserted butt plugs. And I ended up reading those bits feeling simultaneously turned on and ashamed about being turned on.
It was exactly like being fifteen again, to be honest.
I am hoping that my friend with the sjambok will give me a full demonstration soon. I hope it goes without saying, that my enthusiasm for being spanked by a ruddy great heavy whip, is in no way an endorsement of that implement being used in any non-consensual scenarios.
Actually, it’s “Swords into Ploughshares”, isn’t it? Let’s mount a campaign to take all torture equipment from oppressive Governmental regimes and abusive totalitarian authorities and redistribute them to kinksters.

Just think how much better the world would be.

14 thoughts on “Sjamboks, Spanking and the Wrong Kind of Torture.”