In the Coen brothers’ movie Burn after Reading, there is a scene in which George Clooney takes Frances McDormand into his basement and shows her a very singular chair which he has constructed, having seen similar things for sale in “gentleman’s magazines” for twelve hundred dollars.


“I’m lookin’ at this thing,” he tells her “and I think, ‘You gotta be kiddin’ me.’ I’m a hobbyist. Thing’s basically nothing but speed rails. I figure I’d go down to Home Depot and whip this up myself for a hundred bucks.” 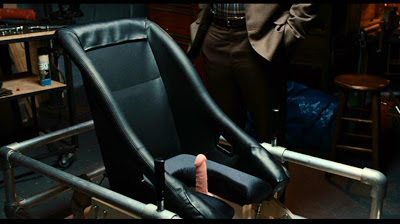 “Oh my god,” says McDormand with an expression that could be very easily be interpreted as a the sort of shock, horror and general freaked-out-ness most of us would feel when being presented with a home-made fuck chair at the end of a first date. Turns out she’s not as freaked out as you might think, though. “That’s fantastic,” she says in an awed whisper.

Except that dolls who poop themselves are totally a thing. Have been for years. Withnail writer/director Bruce Robinson should be claiming some kind of royalties.

So it should come as no surprise to find out that mechanised sex machines aren’t just something that were dreamt up by Joel and Ethan Coen for the purposes of making their characters look like hilariously deviant weirdos.

“The Maestro Multi-Faceted Sex Machine was designed with precision craftsmanship and extreme attention to detail. This premium sex machine from LoveBotz comes with an adjustable speed of 90 to 300 RPM so you get to choose the perfect thrusting speed for the occasion. Easy to assemble and easy to use, you can adjust the Maestro’s height, angle, stroke speed and thrusting depth.”

I can choose the thrusting speed, angle and depth? You’re spoiling me. I’ll take two!

If your budget is ever so slightly larger, you might want to consider the F-Machine Pro 2 Fucking Machine. Available to purchase for £549.99.

It seems impossible that anything could look less sexy than the LoveBotz but you know, I think the F-Machine has managed it. The designers clearly considered ‘functionality’ more important than ‘looking in any way attractive’.

(I love that show by the way. They were all dressed like they were part of some futuristic dystopian nightmare. I was happy to imagine that society, as we know it, had completely broken and the last few humans were having to scour the wreckage in order to produce a hastily cobbled together mechanised scooter. Or a Fuckbot, naturally.)

But back to the F-Machine Pro 2 Fucking Machine.

I don’t know what it is, though, point me in the direction of a mechanised “thrusting” apparatus and I’m strangely reluctant to bend over and offer up my delicate lady areas. I’m probably missing out.

Sexual pleasure is all very well, but I find, being a massive spanking pervert, any kind of sexual shenanigans are a secondary consideration. Being bent over and repeatedly hit on the arse with stuff will always trump clitoral stimulation and ‘thrusting’-based pleasures when I’m planning my ‘perfect evening’.

Is there a mechanised robotic device designed with the zealous spankee in mind? Of course there is.

Ladies and gentlemen, may I introduce you to the Spanker Machine. A snip at £76.

I know what you’re thinking: “Why the fuck would I want to purchase something which appears to be a camera lens attached to some meccano?” Well, hold your horses there spanko-sceptics, maybe you should check out the video before you leap to any conclusions.


Um… yeah. OK. It’s not much of a spanking is it? Do you think the thong-clad model in the video would have even been aware  that there was a spanking taking place if it wasn’t for the slight slappy noises and, you know, the fact she was being paid to be there?

The Spanker Machine is only suitable for spanking implements which weigh less than 100 grams. Funnily enough, I haven’t weighed all the implements in my gentleman friend’s collection but, you know what? I reckon all the best stuff would be unsuitably heavy for robo-spanking purposes.

If I can be on the receiving end of such things from a nice, funny and delightfully sadistic human being instead, that’s just a massive bonus.

#Piggate: Does it really matter where th