This is my ‘S’ post for the Spanking A-Z Blog Challenge. “What’s that?” you ask. Check out my page here for more information and a list of all the wonderful bloggers taking part. 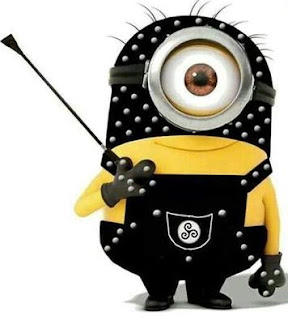 Grey, as I am sure you already know, is Fifty Shades of Grey told from Christian’s Grey point of view.  The first few chapters were included at the end of Fifty Shades Freed. Or at least in the copy of the book that I bought two or three years ago. This doesn’t seem to have been mentioned in any coverage of Grey that I have come across (although to be fair, I haven’t been paying them a lot of attention.) Which leads me to suspect that most people didn’t make it to the end of the third book.

The thing is, for the couple of chapters I read, reading the story from Christian’s perspective makes some kind of sense. In the first few chapters of Fifty Shades of Grey, we don’t really know what Christian’s take on the situation is. What does he make of Ana Steele the first time she comes tumbling into his office? Was his turning up in the hardware store in which she worked a lucky accident or part of his weird-arse stalker shit? (Spoiler: Weird-ass stalker shit, obviously.)

Once the couple start dating though, we know exactly what Christian Grey is thinking. We know because he and Ana discuss it in long, boring and fucking unrelentless detail. What on earth could be added to the interminable emails that the couple send to one another when read from Psycho Boyfriend’s perspective?

But, you know what, E L? Sooner or later, you’re going to have to write a different book. I know it’s hard. I know you want to keep the cash cow incessantly lactating. But I’m sure you’ve got at least one non-Fifty Shades of Grey book in you.

J K Rowling managed it. So did Stephanie Meyers. She managed to quit the Twilighting habit and write The Host, a dystopian sci-fi novel all about invasive aliens hosts and complicated love triangles and whatnot. She didn’t just re-write Twilight from Carlisle Cullen’s point of view or something.

Not that that I’m telling you how to do your job, E L James. You know how to recycle, re-use and endlessly rehash books better than anyone.

3 thoughts on “Sequels, Spin-Offs and Shameless Cash Ins. (Yes, E L James, I am looking at you.)”