This is my ‘R’ post for the Spanking A-Z Blog Challenge. “What’s that?” you ask. Check out my page here for more information and a list of all the wonderful bloggers taking part. 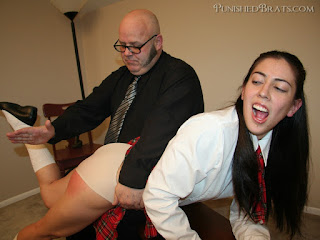 How do I feel about “Slapping/Punching (back, buttocks, chest)”? Well, mostly I feel that there’s a world of difference between being slapped on the buttocks and being punched in the chest. Your drop down list isn’t really giving me nuanced enough options there, Wikiphilia. Also “panties” as a kink option? What’s my experience of “panties”? Some? A lot? Expert? I mean, I wear knickers on a daily basis. After forty-odd years of knicker-wearing I feel like I should be able to count myself as as an expert. I don’t think that’s what they meant, though.

Happily, my friend’s and my lists didn’t reveal any major discrepancies in our tastes. We’re both massively into spanking and happy to experiment with bondage. We already knew this about one another. Things might have become awkward if one of us had revealed that they found the idea of “human toilets” super hot.

There’s nothing like going through a big fuck-off list like this one to make you realise quite how many things you’re NOT into. Whole sections – Cutting, Breath Play, Humiliation – got a big fat NO from me.

The list also contained roleplay options. The “Animal Roleplay” and “Age Roleplay” sections were ‘no’s throughout. As were most of the options on the “General Roleplaying” list. Whore Play? Religious Scenes? Medical Scenes? Prison Scenes? Um, no thanks. Race Play? Huh? What the fuck? 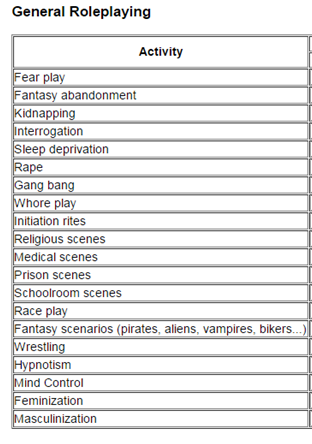 (Not judging you if you are into any of the above roleplaying scenarios, by the way. I’m all about people enjoying their kinks. Well, I’m not sure about ‘race play’. I might be judging you a wee bit on that one.)

But there were a couple of options on the list that I thought I might be willing to explore: “Schoolroom scenes” and “Fantasy Scenes”. Those, I thought, sounded potentially interesting.

Roleplaying isn’t something I’ve done before. Of course, you could argue that any kind of Dom/sub play is kind of role-playing. In real life, I am the least submissive person ever. I’m bolshy and argumentative and opinionated. However, in the right circumstances and with the right person, I am willing to take orders, surrender control and submit to being punished.

Could I take it further and participate in a whole roleplaying scenario? Dress up like a schoolgirl and take my punishment from a stern Headmaster? In theory, it’s a marvellous idea. I haven’t yet created a pie chart of all my mastubatory fantasies of the last twenty-five years (give it time) but I think “schoolgirl punishment” would have a quite a significant wedge of the pie if that chart ever did get created.

“Oxbow lakes are the residue of rivers which used to flow around rocky outcrops…”
The suggestions offered by the Wikiphilia checklist for Fantasy Roleplay were “pirates, aliens, vampires, bikers…” OK, sure. Not sure any of those would make the pie chart, but why not? In fact, why not combine the lot and have a pirate alien vampire bikers scenario? Or we could have a scene in which we roleplay Firefly‘s Malcolm Reynolds giving Space-Whore, Inara a damn good spanking after an argument about shuttle rental renewal?

Or maybe a Tenth Doctor/Donna Noble spanking scenario? Or maybe, going back to the classics, acting out the the “Badly Done, Emma” scene from Jane Austen’s Emma and including the Knightley-administered spanking that the original scene was lacking?

I doubt I could carry it off, to be fair. Although the ‘vampires’ suggestion from Wikiphilia, does remind me of this scene from Buffy the Vampire Slayer where bad-boy sexy vampire, Spike, having developed a unhealthy crush on Buffy, encourages his vampire girlfriend, Harmony, to indulge in a bit of “Vampire Slayer” roleplay. Hey, whatever gets you through the night, sweetheart.

“I’m gonna stake you so much with the slaying powers that I have!”

I doubt any of those particular scenarios are going to be played out in my living room any time soon. I’m not ruling roleplay out, though. It could be silly, it could be fun, it might potentially be very, very hot in an altogether kinky-as-fuck way. (And I am very much in favour of kinky fun.) And with a lovely, understanding Dom, the worst that would probably happen is a massive fit of the giggles and one of us saying “Yeah, this isn’t really working, is it? Cup of tea?”

So go on, people, spill the beans. Have you done much roleplay? Do you all have a bunch of schoolgirl/nurse/Smurfette outfits at the back of your closets that you bring out for kinky roleplaying scenarios on special occasions? Share your experiences. And, most importantly, reassure me I’m not weird for considering it.