*Unlike last week’s post, there will actually be a follow-up to this one.

I have been dabbling in the world of Online Dating on and off since the beginning of the year. Originally I subscribed to Guardian Soulmates because The Guardian is very much the newspaper of the leftwing hippy liberal and I thought I would find it easier to connect to my people there.

This week, though, I signed up with OKCupid and I strongly advise you all to do the same. Even if you’re not actively looking to start dating. Even if you’re in a committed monogamous relationship. Join up anyway! Purely for the pleasure of answering the site’s hundreds and hundreds of random, eclectic – and often barking mad – questions.

Everyone loves answering surveys, don’t they? Particularly ones which ask you how you feel about spanking and scuba diving and whether you would be prepared to ‘squeal like a dolphin’ in bed if your partner requested it. Well, yeah, obviously. In fact I’m a little put out that no-one’s asked me to do it so far in my life. Is squealing like dolphins what all the cool kids are doing during sex these days?

Some of the questions are downright disturbing. “Would you ever film a sexual encounter without your partner knowing?” for example. You know I think there are probably laws against that. Even worse is this one:

I’m definitely sure there are laws against that one. In the process of answering the questions, you pick not only your own answer but those you are happy to accept in a  potential partner. So it’s reassuring to know that one can weed out any potential suitors who are happy to commit sexual assault if they think they can get away with it.

Some of the questions will also help you filter out any racists from your matches. I think I can categorically state that anyone who cheerfully answers ‘yes’ to “Is interracial marriage a bad idea?” or “Do you think there is a statistical correlation between race and intelligence?” probably isn’t the right person for me. Of course, the flipside of this is that OKCupid is providing a means for racists to connect with one another. I’m not sure I condone this. Surely racists should be looking for love on their own dedicated dating sites, WhiteSupremacyDating.com, maybe, or LoveKKK.com.

There are hundreds and hundreds of questions you can answer split into six categories: Ethics, Sex, Religion, Lifestyle, Dating and ‘Other’. I have spent hours answering them like a mad bastard these last few days. It gets a bit addictive after a while. Either that or I think if I answer enough of them I can going to unlock OKCupid’s Hidden Content and Secret Underwater Level.

The really exciting part, is that once you’ve answered some questions, OKCupid maps out your personality in graph form! Don’t tell me you don’t want to see your personality traits mapped out in a bar chart.

Below are all the characteristics that I probably have more of than the average person, apparently. 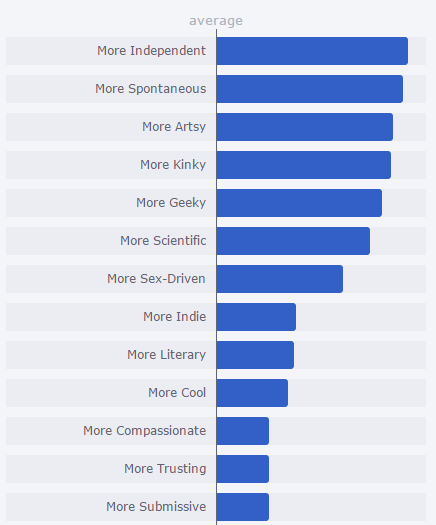 Well, it’s good to have it confirmed that I might be significantly more kinky than the average person. I had suspected something of the sort. I wish they’d put percentage points on it though. I like to put a figure on exactly how much more kinky I am than other people.

Gratifyingly, the personality trait which apparently defines me the most is independence. Yeah, I’ll take that. I’m an independent woman, Bought the house I live in, you know. And the shoes on my feet – I bought them. I depend on me.

Yes I do like to consider myself a ‘honey making money’. Thanks for checking, Destiny’s Child.

I feel that ‘Scientific’ may be somewhat over-represented in that list due to the fact that the site (and its questions) are American and there are a surprising number (to a Brit at least) of questions about Creationism and Intelligent Design. I probably gained a few Science points simply by ‘believing’ in dinosaurs. So I think I am ‘scientific’ in the sense of not being religious rather than knowing how anything works or being able to name more than 4 elements off the periodic table.

Also, please note I am MORE COOL. Not massively more cool but more cool enough. I will get the t-shirt printed forthwith.

Of course MORE than average personality statistics are no use at all without the LESS than average ones. Mine being the following: 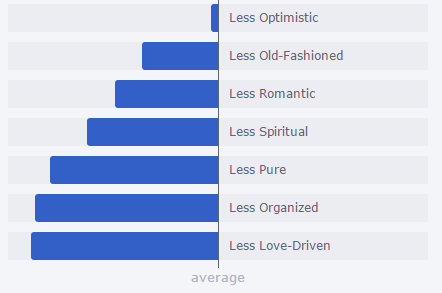 I was a little surprised that ‘Optimistic’ made it onto the ‘Less’ list (if only by a smidge). I consider myself an optimistic person. I think this might be a cultural thing. I come from a culture steeped in moaning – frequently depicted in literature from Eeyore to Marvin the Paranoid Android. From where I’m sitting, I’m all about the optimism. Maybe not so much to you positive-thinking Americans. No matter. Ever-so-slightly pessimistic is probably just the right amount of optimistic.

The OKCupid algorithm has highlighted a couple of personality shortcomings that are a little bit awkward. That I am apparently both ‘less romantic’ and ‘less love-driven’ than your average woman on the street. I am not saying that isn’t  true, I am a cynical, unsentimental curmudgeon when it comes to matters of the heart. I am not sure it’s something I want potential dates to know about me, though. I don’t think I want any person I meet up with to get the wrong impression of what I want from a relationship. Not that I have any idea what I want from a relationship, mind you, but I’m fairly certain that I’m not just after acquiring notches in the bedpost here,

Come to think of it, I’m not sure that admitting to be ‘less romantic’ here is the most sensible idea either. It is possible that my readership might consider that as a romance writer, I have some experience of what I’m writing about. Although if that’s the case then it seems a little unfair romance writers should be expected to have more experience of their subject matter than other genre fiction writers. If I were writing sci-fi, no-one would expect me to have been into space. Having killed a man isn’t considered a prerequisite for writing thrillers. And even if my wizened old soul isn’t totally stuffed full of hearts and flowers, it doesn’t mean that I am completely unromantic.

In fact, in one of the OKCupid questions, I said I would be OK if someone farted during oral sex. Seriously, you don’t get any more romantic than that. 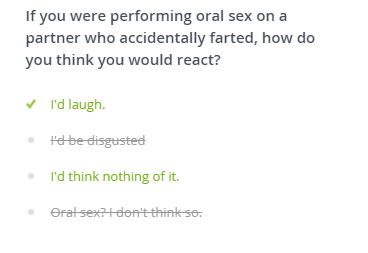