The Eurovision Song Contest happened this month. I love a bit of Eurovision. Even when the UK couldn’t actually do any worse if it tried. Poor Michael Wotsisflip and his perfectly adequate performance. It wasn’t the absolute shittest song that night. It deserved better than last place. Fourth from last at the very least, I reckon.

As it turns out, I was a bit disappointed by Hatari’s performance on the night. The song was great in a shouty goth way, their dancing was enthusiastic and they’d obviously gone to a lot of trouble with their costumes.

Wearing a lot of PVC, leather and straps isn’t really noteworthy in the world of popular music though, is it? It’s just one stage up from ubiquitous corset and fishnets as stagewear. In the very same competition, Cyprus’s Tamta and friends were rocking outfits that might well have been bought at the same Fetish Fair as Hatari’s. 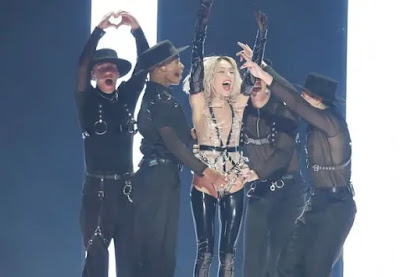 I’m not holding any kind of grudge against Hatari though. The more I find out about them, the more I like them. They are absolute poppets.

They are all exceptionally polite and softly-spoken in interviews. Their particular areas of interest are death, the overhaul of human society, the pretentiousness of human existence and the end of the world. Also cake, apparently. Hatari loves cake.

The contest was hosted by Israel this year and Hatari caused controversy by waving Palestinian flags while they were onscreen during the voting. This sounds cool and I’m sure they meant well by it but I have to say I’m with the Palestinian Campaign for the Academic and Cultural Boycott of Israel (PACBI), which had demanded all acts pull out of the event. “Palestinian civil society overwhelmingly rejects fig-leaf gestures of solidarity from international artists crossing our peaceful picket line.” Any band who really wanted to support the Palestinian people shouldn’t have been performing at this year’s Eurovision.

Not that I can talk, obviously. I watched the bloody thing.

Any stated desire by Hatari to change the world should probably be taken with a pinch of salt. “Eurovision is part of Hatari’s vision to bring Capitalism to its knees.” Good luck with that, chaps. Someone needs to do it. It might as well be you guys.

But whatever they’re doing I hope they carry on doing it for a good long while yet. They’re outrageously deadpan, cheerfully nihilistic and obviously a bit kinky. Hatari, I do believe I love you.

Millie and the Mill Owner: A Short Story

Book Review – Rafe the Guardian by