My two books, Lady Westbrook’s Discovery and His Lordship’s Apprentice, are both set in or around London during the end of the nineteenth century. As is my current work in progress. So it should be no surprise to anyone that I love reading books which share those settings.
And there’s nobody more London and nobody more late Victorian than Sherlock Holmes, the world’s first consulting detective.
I love all the Sherlock Holmes books. Overall, I prefer the short stories – not because I dislike the full-length novels but because the short stories are usually so exquisitely perfect with just the right amount of satisfying payoff to justify the mystery. Take the Adventure of the Red-Headed League from the Adventures of Sherlock Holmes. Holmes’ client has been employed by the mysterious Red-Headed League to sit in a room all day transcribing pages from the Encyclopaedia Britannica. What does it all mean? Don’t worry, baffled client! Holmes will figure it out. 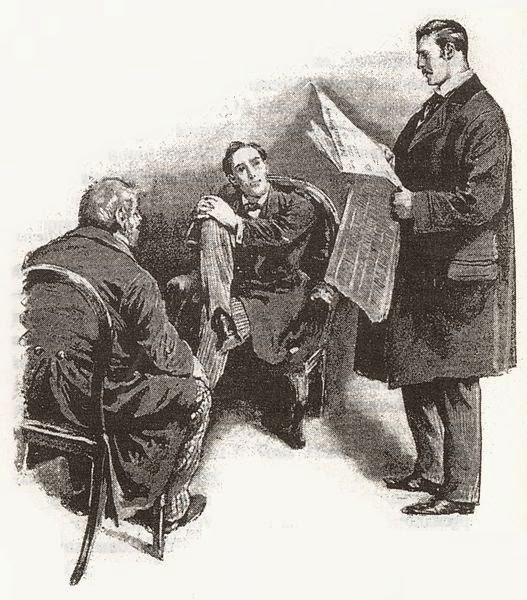 Conan Doyle tried to kill off Sherlock Holmes once of course. He was persuaded to bring him back though after pressure from the public and the promise of sweet, sweet money. We’d never seen Sherlock Holmes die presumably because the author had always intended to leave the door open.
Holmes is missing from 1891 until 1894 and then comes back in the Return of Sherlock Holmes, freaking Watson the fuck out in the process (not a direct quote). I rather like the fact that Conan Doyle chose to kill off Watson’s wife during the gap as well although it barely gets a mention. It’s as though having decided he was going to pander to his fans’ wishes, Conan Doyle decided that he might as well go the whole hog and give the people exactly what they wanted.
John Watson proposed to Mary Morstan at the end of The Sign of Four. Which is all very delightful for them but it gave Watson domestic  responsibilities that he always had to get out of at the start of every new  adventure and split up the roommate dynamic. The Return of Sherlock Holmes sees Holmes and Watson move back in together  into their rooms in at 221b Baker Street which is, obviously, exactly where we want them. The boys are back in town! Old London town!
You can’t really mention Sherlock Holmes without acknowledging the many adaptations in film and television. I’m not crazy for Sherlock. I want to love it but it’s never quite as clever or interesting as I want it to be. The casting of Benedict Cumberbatch and Martin Freeman is spot on, though. One of my bugbears for many years was the way that John Watson was always portrayed as a bungling old man. It started with Nigel Bruce who was Watson to Basil Rathbone’s Holmes and the caricature  stuck for the longest time. Watson wasn’t old (he was retired, sure, but retired from the army which is a whole different ball game) and he certainly wasn’t an idiot. He was the stand-in for the audience and the asked the questions we needed answering to understand what was going on but he wasn’t thick. Holmes would have hardly wanted to hang out with him if he were.
Of course thanks to Martin Freeman and Jude Law, we all know that Watson is smart and cool now (but not as smart and cool as Holmes, obviously). In fact sometimes he’s even a smart, cool, sexy Asian lady which is about as far from Nigel Bruce as you can get.
It would be nice if the next wave of adaptations (and there will be more, you just know it) can sort out my other main bugbear which is the way that every film and television adaptation seems determined to turn Irene Adler, Mycroft Holmes and Moriaty into hugely significant characters. They weren’t. Adler was in one short story, Mycroft was the backgroundiest  of all background characters and Moriaty frankly was rubbish. Holmes doesn’t need a nemesis, his own demons do a far better job.
And while we’re talking about adaptations, I really want to mention Loki Renard’s excellent spanking story The Taming of Miss Munroe. A Watson-ish narrator tells the story of not-Sherlock Holmes character Mr James Walker, a master of female discipline who has “handled the larcenous heiress d’Bonnay and the tribe of female amazons in deepest Gabon”. The story recounts how Walker’s disciplinarian abilities were tested to the limited by spirited heiress, Miss Munroe, the latest in a long line of cases requiring his most particular method.
It’s wonderfully written – a note-perfect pastiche of Conan Doyle’s style and evocative of Sherlock Holmes’ adventures despite being all about spanking. It’s nice when two things you really enjoy come together isn’t it?

8 thoughts on “H is for Holmes”

G is for Go and buy my new book now, Go