The third and final instalment of the Fifty Shades trilogy, Fifty Shades Freed, was released in cinemas a couple of weeks ago.

I reviewed the first two films for otherwise respectable film website Mostly Film. Because apparently I can’t stop having opinions about the whole franchise.

Mostly those opinions aren’t all that complimentary to be honest but there you go. I’m sure E L James isn’t too bothered about my less than enthusiastic opinions. And if she is bothered, she can always console herself by rolling around naked on large piles of money. That’s what I would do in her situation.

My review of Fifty Shades Freed review is up today. As Mostly Film tweeted “Etta returned to give Fifty Shades a stern talking-to. It loved it.” 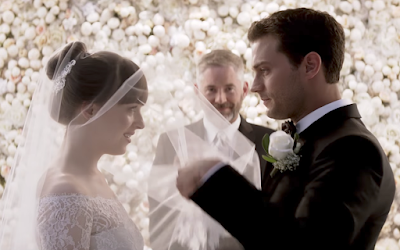 The problem with adapting a book for the big screen is that you are always going to have to leave some stuff out. Take E L James’ final instalment in the Fifty Shades trilogy Fifty Shades Freed. The book is 60% BDSM-y sex, 35% Christian Grey acting like a knobhead and about 5% some poorly thought out plot involving a Bad Man, foiled kidnap attempts, arson and stuff.

Check it out and let me know what you thought of the (possibly) final cinematic outing of Chris ‘n’ Ana.

Return both of and to Corbin’s Ben

Book Review – In Need of Correctio