Spanky romantic relationships don’t happen in a vacuum. Many of my fellow spanky romance writers are happily married wives with a clutch of dependent offspring.

I imagine that maintaining an enthusiastic and abundant sex life is a tricky thing when you have a herd of tiny unreliable sleepers about the place at the best of times. Does this get a whole lot trickier when there’s spank-based kinkery involved? 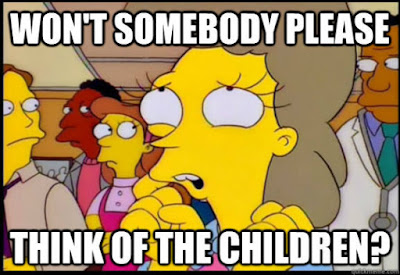 Spanking is loud. I live in an apartment block and worry that my neighbours may have been occasionally subjected to the resoundingly loud noise of a visiting gentleman’s hand repeatedly hitting my arse. I do hope not. I never hear what my neighbours are up to. I hope this is because the building is well sound-proofed. Of course, it could just be that all my neighbours are terribly, terribly quiet and I am the inadvertent kinky Nightmare Neighbour from Hell.

I am a parent, too, of course. Not that I have to worry about my daughter overhearing my spanking shenanigans. She’s an adult. Although she nominally lives at the same address as me, even when she’s not at university she generally has better places to be. I do have to warn her when popping home unexpectedly might be a bit awkward. “You’re not planning to come round next Thursday are you? No particular reason.”

She knows I’ve been dating and she seems to be pretty happy about it. I imagine she thinks it’s vanilla sex that I don’t want interrupting, though. And while nobody wants to walk in and find their middle-aged mum sexing it up with a gentleman friend, I kind of think it would be worse if she came home unexpectedly and found me tied to the dining room table on the receiving end of a severe caning. Which is why I always bolt the door. Just in case.

Parents have sex. It’s allowed. I have a younger sibling which means my mum and dad must have had sex at least once since I was born. It’s possible that they have had sex more than once since 1974. They clearly still fancy one another. I am not going to consider it though because parents + sex = ewwwww. Nope. Not even going to think about it.

I do accept that this isn’t a healthy attitude on my part. Not only do parents have sex. Frequently they have sex for reasons other than making babies.

Babette Cole’s wonderful book Mummy Laid An Egg explains exactly where babies come from. It’s written for children and brilliantly – while also explaining about penises and vaginas and sperm and whatnot – tells small people that Mummy and Daddy also have sex for fun. Here are some ways mummies and daddies fit together: 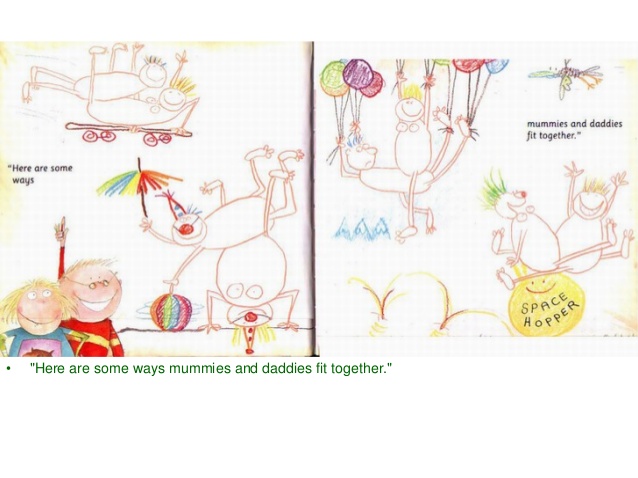 And while I’m delighted that kids who read this book might grow up thinking that skateboard sex, clown sex, helium balloon sex and space hopper sex are a natural part of adult interpersonal relationships, it sadly doesn’t cover the option that sometimes a man and a woman who love each other very much may choose to hit one another with sturdy implements and leave a week’s worth of bruises.

So, how do you manage it, kinky parents? Does every one-hour child-free window mean a quick sprint to the spanky toy bag so that you can fit in a swift bit of paddling/nipple-clamping/*insert kinky fetish-ing here* before you have to go and pick the kids up from Scouts? Do you just shrug it off if one of your offspring wanders into your bedroom at 11pm and sees Mum bent over Dad’s lap with her knickers round her knees? “Go back to bed, Riley. I’m busy inspecting Mummy’s bottom. It’s a Grown-Up thing.”

Recently, Reddit had a thread about “Things You Don’t Want Your Children To Know About You”. One of the responses was “That daddy and I don’t go to ‘dinner parties’, we hit up swing clubs.”

Do kids need to know about their parents’ sex lives? Probably not. But do young people need to know as much as possible about sex? Abso-fucking-lutely. I have always had an open dialogue with my daughter about sex, contraception, only doing things that you’re OK with and never ever letting people slut-shame you. I know a frankly ridiculous amount about my daughter’s sex life. I am delighted that she is she so open about it with me. She probably knows more about my sex life than is usual in these circumstances. Although she does get the vanilla PG version, to be fair.

Maybe I’m just getting the vanilla version of my daughter’s sex life. That’s fine. I go to munches regularly. I live in a university town so we get a lot of students attending. My daughter’s university is only forty-five minutes drive from here. I have a friend who is one of the organisers for munches in my daughter’s University town. He’s mentioned that they they get a lot of students there too, and, for all I know, my kid might be a munch regular, I’m fine with that. If she does have a kinky side, I hope she doesn’t wait until she’s forty before she embraces it. As long as we’re not attending the same munches or BDSM sex clubs as one another, it’s fine.

I’m just not sure when spanking, caning, nipple clamps, butt plugs and bondage should be brought into the discussion. I don’t think it was covered in any of the books I read. Parenting is a bloody tricky business.

8 thoughts on “Don’t Tell The Children.”