This is my ‘D’ post for the Spanking A-Z Blog Challenge. “What’s that?” you ask. Check out my page here for more information and a list of all the wonderful bloggers taking part. 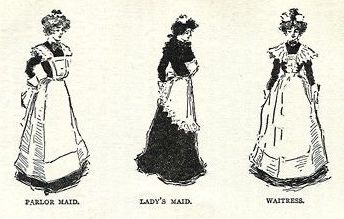 In 1891, one in three women between the ages of fifteen and twenty were employed in domestic service. Violet had a far better time of it than her real-life counterparts, progressing quickly from scullery maid to parlour maid to onstage magician’s assistant to Lord Hardcastle’s alter ego “The Marvellous Marvelo”. Do things between Violet and her sexy, titled boss progress further still? (Spoiler: Yes. Of course they do.)

The following scene takes place near the beginning the story. Following an unfortunate incident in the dining room involving an escaped dove and a lot of bad language, Violet has been summoned to Lord Hardcastle’s study. Nobility such as Lord Hardcastle wouldn’t normally be involved in the hiring and firing of lowly domestic staff. Violet has no idea what to expect from this encounter. But, hey, this is a spanky romance. You can probably guess how it’s going to pan out.

Lord Hardcastle turned to Violet. “Very well,” he said. “To business. I understand that you have been in my service for two months.”

“Yes, my Lord” Violet replied. Her nervousness rendered her throat so dry that she could barely speak at all. Was that a sufficient response she wondered? Should one provide more information when addressing a lord or speak as little as possible? She honestly had no idea. Much as she had been warned that Lord Hardcastle was highly irregular compared to other men of his station, she hadn’t imagined that a scullery maid such as herself would have to interact with his Lordship face to face. Certainly not this soon.

Ah well, Violet reasoned, it hardly mattered. She fully expected to be fired without a reference and doubted she would need to interact with the nobility again.

“Well, Violet,” continued Lord Hardcastle, oblivious to Violet’s internal panic. “Firstly, I want to thank you for the swift way you dealt with my escaped dove. I should not have left her on the table like that and it was understandable that you disturbed her. You dealt with the recapture very professionally. I was impressed. She is a trained bird and very valuable. I should have hated to see her injured or upset. Thank you.”

Violet stared at Lord Hardcastle in shock. This was not what she had anticipated.

“However,” Lord Hardcastle continued. “There are standards of behaviour – and of course language – we uphold to in this house. I reserve the right to entertain visitors in my own home without them being subjected to the kind of words that would shock a sailor.”

Violet’s heart sank once more. “I am very sorry, my Lord” she mumbled.

“I am sure you are,” responded Lord Hardcastle. “I am also sure you are a valuable member of staff here. I have no desire to terminate your employment over this incident. However, you will be punished.”

“I’ll offer you the choice, Violet. Either you can forfeit a day’s wages or submit to a spanking.”

Violet’s head was a confusion of different emotions. While she was elated that she still had a job, she was truly terrified at the prospect of being physically punished by Lord Hardcastle. She knew she didn’t have a choice. She could not afford to lose a day’s wages; her family were relying on her.

“I will take the spanking, my Lord.”

Domestic servants are usually the bit-players in books. Historical romances normally focus on the lives, loves and, hopefully spankings, of the nobility.

However, there are some great examples of books where the domestic staff get the chance to enjoy sex and/or romance with their employers out there. Below are three of my favourites.

Geneva DeCroix’s The Lady’s Maid (which annoyingly, now seems to be only available to purchase separately as single chapters rather than the complete book that I bought) follows the story of Jesslina who accepts the post as a Lady’s Maid to the wife of Lord Piers. Lord Piers household is a veritable orgy of sex and sexy violence. Everyone fucks and spanks everyone, it seems. The story starts with Jesslina receiving a harsh spanking from Lord Piers, but soon she’s watching the male servants being beaten and buggered by the butler and happily administering punishments to the mistress herself. Honestly, they’re all at it.

Maren Smith’s Angel of Hawkhaven is an altogether more romantic affair. Ella Rayette is down on her luck following the death of her debt-ridden father and forced to work in a tavern where she is rescued from a savage beating from her boss by a mysterious ‘angel’. She promptly steals his watch because, hey, a girl’s got to get by somehow. Awkwardly, when she procures a new position as lady’s maid to a difficult and demanding woman with a severe disability, she discovers that her new boss – the lady’s brother  – is none other than her ‘angel’, Matthew Hawkhaven. It’s a wonderful and unexpectedly moving story in which Ella struggles to prove herself in her new position while battling the conflicting feelings she feels towards the Master of the house.

And for absolute, adorable romance, look no further than Renee Rose’s Pleasing the Colonel. Our heroine Amanda Downy has been employed as a governess to the children of widowed Colonel Watson. As a governess, Amanda is not really one of the servant classes. Nor, of course, is she one of the family. Governesses occupied a sort of limbo between Upstairs and Downstairs. Although the sweet and believably written romance between Amanda and her employer means that she is certainly headed Upstairs. (And that sounded a lot more innuendo-y that I intended it.) This was one of the first books I read by Renee Rose and it is still one of my absolute favourites