Yesterday I promised you an in depth analysis into Disney Romances.

And like Rapunzel in Tangled, when I promise something, I never ever break that promise.

(That’s bollocks obviously. I have broken a shit-ton of promises in my life. Still, it’s nice to know that Rapunzel ended up with such a strong moral compass despite spending eighteen years prisoner in a tower with only an evil witch for company.)
I want to pretend that there is some sort of scientific study going on here so I have awarded each couple marks out of five based on how likely I think it is that things will work out for them long term.
I have focused on a whole bunch of Disney romances as part of my rigorous investigation. I don’t want to completely blow your minds in one go (exploded brain matter is a devil to get out of the soft furnishings) so I’ll share my thoughts on the first five (in chronological order of release date) in this post. You can enjoy my thoughts on the next batch tomorrow. 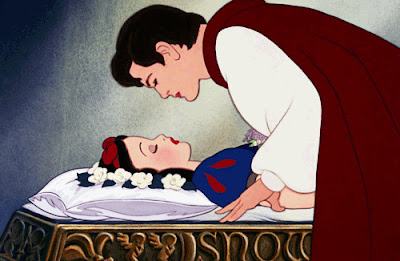 Poor old Prince Wossname. First ever Disney Prince and the bloke doesn’t even have a name to call his own. And what do we know about the no-name Prince? Not a lot. He turns up at the beginning, sings the fairly humdrum number “One Song” and then buggers off again for most of the film. Only swinging by at the end after Snow’s supposed demise. So saddened is he by the death of such a beautiful maiden that he swoops in for a kiss because apparently snogging the corpse is perfectly acceptable Wake etiquette in Fairytale land.
Luckily a kiss from a dashing – if forgettable – prince is just the ticket for curing all that pesky dead-ness and Snow White perks up enough for the pair of them to charge off into the sunset. (Charge off on a horse obviously, I’m not suggesting the two of them made a run for it like a couple of stampeding rhinoceroses.)
They don’t even speak to each other during the magical end bit! What kind of a basis for a relationship is one shitty song and a magical re-animating smooch? It’s not like Snow can’t relate to men. Throughout the film, she has been building relationships with the seven guys she’s been sharing a house with. Grumpy, in particular. A ‘Snorumpy’ romance would probably have made a more convincing love story.
Verdict: The chances of a happy union don’t look good. Hey Prince, take Snow White on a date to Pizza Express or something before you rush into wedlock. Get to know one another. Maybe even tell her your name. 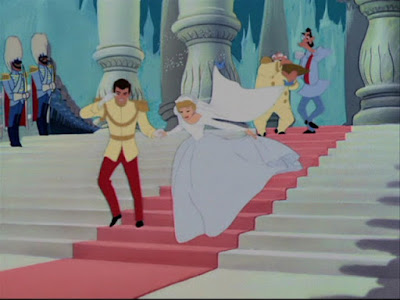 Oh dear, another one. A couple of dances at a fancy party and before you know it, Cindy and Charming are convinced they’ve got the whole ‘Life Partner’ business all sewn up. Obviously there are a few bumps along the way – poor timekeeping, evil step-mother, Cinderella’s infuriating lack of initiative when it comes to sorting her life out – but happily it all gets ironed out in time for our heroes to enjoy a Wedding Day-based Happily Ever After.
Personally I would be a bit wary of throwing my lot in with a guy who, despite professing to love me, was unable to recognise me on a second meeting based on anything but the size of my feet. What, my face, voice and entire fucking personality aren’t ringing any bells with you, Squire? I guess, you’re really into the feet thing, huh?
Actually, I would be totally fucked in this scenario with my boringly average sized feet. The prince presumably would have proposed to the first woman he encountered who took size 6 shoes. Way to make me feel really feel special there, Charming.
Verdict: No idea whether there would be a happy marriage once the two of them have to spend more than a couple of hours in one another’s company. There’s only so long even the most ardent foot fetishest can spend gazing at his wife’s tiny tootsies. They might be OK, though. Cinderella is the most passive, unassertive, acquiescent and totally bloody mimsy of all the Disney princesses. She puts up with any old shit. She’ll probably be fine. 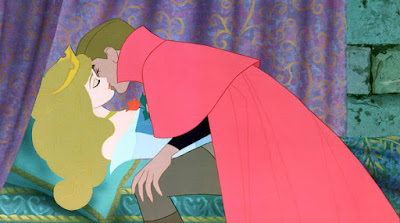 In a surprisingly accurate nod to historical Royal politics, Princess Aurora and Prince Phillip are betrothed to one another in infancy in order to strengthen relationships between their neighbouring kingdoms. Of course, shit kicks off when the Wicked Fairy, Maleficent gets pissy about party etiquette. This results in Aurora having to hide away under an assumed name with a bunch of (un-wicked) fairies all pretending to be peasants like some kind of Medieval Witness Protection Scheme.
Aurora and Phillip fall in love via the tried-and-trusted method of singing a schmaltzy duet on their first meeting. When the prince finds out that he’s already promised to some princess he’s never heard of, he’s all “Screw you, Dad! I want to marry the smoking hot peasant chick!” I like his attitude.
Earlier in this post, I slated Mr Snow White for snogging an unconscious woman. I appreciate that “snogging an unconscious woman” is very much Sleeping Beauty’s prince’s primary character arc. To be fair to Prince Phil, it was definitely less creepy when he did it. He knew there was Sleepy Magic afoot. He wasn’t just chancing a snog with a sexy-looking dead babe.
Verdict: I think things might work out for these two. Apart from anything else, their parents are already best mates. That’s going to make things easier at Christmas and at the royal grandbabies’ birthday parties. 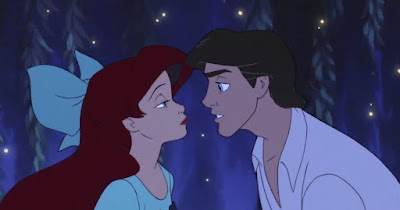 Hmm. The problem with Ariel is we know that long before she sets eyes on dashing young Prince Eric, she is already desperate to be part of the human world.
She lurves us air-breathing, fire-lighting, foot-walking types. Fuck knows why.
Why wouldn’t you be happy being a Mermaid Princess? It sounds great. Court Composer Sebastian tries to temper her obsession with the land-people. “Darling it’s better, down where it’s wetter,” he sings. I’m with the crab. There’s a dude who knows what he’s talking about.
So maybe Ariel does love Eric. Or maybe she is so desperate to become part of the shore-based biped community that she’ll shack up with the first Royal Human who gets thrown in her path. She’s a fish-tailed version of an online Russian or Thai bride. So determined to get her Fairytale equivalent of a “Human Passport” that she’ll do anything. Betray her father, mutilate her body, surrender her voice. Whatever it takes.
Happily, being a Disney movie, things work out nicely for Ariel and Eric. In Hans Christian Andersen’s original story, the prince marries another woman and the little mermaid dies. (By turning into foam because mermaids have no souls and God does not welcome them into Heaven. Jesus fucking Christ, Andersen, you didn’t half write some depressing children’s stories. My mum still hasn’t gotten over reading “The Red Shoes” to me when I was six.)
Verdict: The couple do spend quality time together. Enjoying misunderstandings about forks, going on romantic boat rides – normal dating stuff. So that’s a positive. On the other hand, Prince Eric did almost marry another woman while he was courting Ariel. That might make things awkward later on. I imagine that mid marital argument, Ariel is going to throw that back in Eric’s face. “For God’s sake, how many times do I have to say it? It was a magic spell, Ariel!” “Well, that’s very convenient, Eric. Did you fuck her? Did you?” 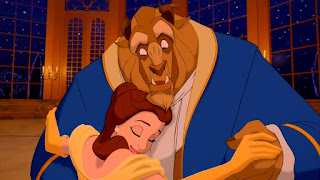 I do love this film so it pains me to say that Belle and Beast have the most unhealthy screwed-up relationship of any Disney prince and princess ever.
Belle’s love for the Beast is a textbook example of Stockholm Syndrome. She becomes the Beast’s prisoner when she trades places with her father who has been incarcerated in a tiny dungeon cell. She expects the same treatment as her father. Instead she is given a well-appointed bedroom, pretty dresses, the services of a bunch of charming talking household items and a lovely slap-up tea (“Try the grey stuff, it’s delicious! Don’t believe me? Ask the dishes!”). The Beast is totally fucking with her mind.
In the best traditions of those suffering from Stockholm Syndrome, Belle mistakes a lack of actual abuse for acts of kindness. And I’m not sure that there’s entirely a lack of a abuse. The Beast is a monster, prone to acts of rage, anger and roaring and – you know – all-round Beast-y stuff.
Even his professed ‘acts of kindness’ are a bit shit. He ‘gives’ Belle a library as a gift. Gee, thanks. So you’re letting her access a room that you already had that you weren’t using anyway? Aren’t you a fucking hero?
Putting the whole abusive kidnapper imprisonment thing to one side for a moment (but only slightly to one side because I do think “incarceration under threat of violence” is a bit of a red flag in a relationship), Beast simply isn’t the right man for Belle.
Belle is unhappy with her “provincial life”. She rejects the romantic attentions of Gaston because – although he is physically attractive – he is shallow, uneducated, boring and selfish.
If you accept the premise that Beast in his Beast form is unattractive (and I don’t because, quite frankly, being an eight foot tall cross between a Wookie and a Bear is the primary thing the guy has going for him) then the only difference between Beast and Gaston is that Gaston is prettier than he is.
The Beast is thick. He is uncultured and uneducated. He is far more provincial that Gaston. Dude’s never even left his fucking castle. Maybe having the Beast-y curse lifted will change things. Maybe he’ll suddenly want to read ancient Greek philosophy, become proficient in Taekwondo, write poetry and travel the world. Let’s hope so because otherwise Belle is going to be bored out of her fucking skull. She really isn’t going to enjoy just twatting about the castle all day. Especially post-spell when there isn’t even any singing crockery to entertain her any more.
Verdict: I want it to work out for them, I really do. It’s a great film. Smashing songs. But, you know, if Belle was a friend of mine and she asked my advice about whether she should marry this puny boy-child who used to be a violent abusive beast, I would tell her to run. Run away now! The hills are that way.

And that’s just the start. There’s still a shedload of Disney romances for me to get all opinionated about. What about Jasmine and Aladdin? Pocahontas and John Smith? Anna and Kristoff? I’ll be back with more of my ill-informed opinions tomorrow.
Let me know your favourite and least favourite Disney pairings in the comments section.

1 thought on “Disney Marriages – Which Ones Will Go the Distance? Part 1”