Corbin’s Bend is back! And it’s bigger than ever! Well, it may not actually be that much bigger. They’ve probably built a few new houses but otherwise the Bend is pretty much how we last left it. It’s all still there – the spanking-based housing community in the Colorado mountains. There’s a road called Spanking Loop. There’s a Dome. I’d forgotten they had a Dome!
Back to Corbin’s Bend kicks off with Vanessa Brooks’ Sub-Divided which is a belter of a story to start the new series. Newcomers Josie and Max are joined by a host of series regulars, Dr Marcus Devon, Jim and Ange O’Brien and of, course, Brent and Charmagne Carmichael. The gang’s all here!
Josie and Max have just moved to Corbin’s Bend and in a rather wonderful leap of faith the couple’s moving to the World’s Best Spanking CommunityTM is also their first time living together as a couple.
They already embrace a D/s relationship and Josie already knows she loves Corbin’s Bend from her numerous visits to her grandparents, Liam and Nicky, who are current residents.

But it turns out that life isn’t going to be straightforward for the pair. For one thing Josie encounters a run of extraordinarily bad luck from the moment she arrives. Her house gets flooded, she almost gets run down, a night out at a club turns very weird, there’s invasions of moths, and locusts and hordes of zombies. Maybe not those last two.

The bad luck comes so thick and fast that Josie suspects that foul play is at work but is at a loss to understand why it might be happening.

On top of that, Josie is struggling with what exactly she wants from her and Max’s Dom/sub relationship. While she might be adamant that she is “only a submissive in the bedroom”, Max doesn’t necessarily see it that way.

But while in real life, I don’t want to be punished for my actual shortcomings, I don’t feel the same about the literary heroines in the books I read. All the domestic discipline! All the time! It’s the Corbin’s Bend way. I was willing Josie to hand herself over to Max’s authority. Stop fighting it, Josie, you know you want it.

Josie and Max are great together. The sex and spanking between them is fantastically hot. The scene when Max first arrives at Corbin’s Bend… just wow. They’re clearly perfect for one another which makes watching them work hard at establishing their relationship, all the more satisfying.

It’s good to be back at the Bend and Vanessa Brooks’ story was the perfect homecoming. 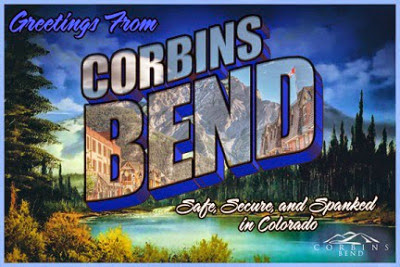 If you haven’t encountered Corbin’s Bend before, then, boy, you have a lot of catching up to do. Not that you have to. Sub-Divided and, in fact, all of the stories in the series work perfectly well as standalone stories. But if you do want to fill your virtual bookshelves with delicious spanky stories by by some really great authors (and me!), the links are below. Enjoy!
Welcome To Corbin’s Bend
Return to Corbin’s Bend
At Home In Corbin’s Bend
Corbin’s Bend Homecoming
Love in the Rockies: A Corbin’s Bend Valentine’s Day Collection

The Liberation of Miss X – On Sale