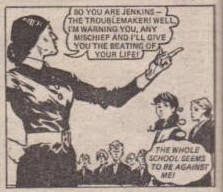 If I were the sort of person to spend time analysing why I am quite so obsessed with all things spanking, then I think DC Thomson & Co, the publishers of girls’ comics such Bunty and Nikki,  would have a lot to answer for.
As it happens, I am not that sort of person. Spanking is just awesome. I may as well waste time trying to work out why I like kissing. Or orgasms.
But if girls’ comics of the 1980s didn’t make me into a spanko, they certainly tapped into that part of my psyche at quite an early age. I don’t know if other countries had comics like Bunty. That and Nikki were the two that I used to read regularly but there were a whole slew of them back then – Judy, Mandy, Tammy, Jinty, Misty (ending in –y was essential for some reason).
Each issue would contain seven or eight serial stories spreading over several weeks. There was usually something pony related, something about a girl with dreams of becoming a ballerina, something set in the future with comical robots as well as an impressive number of stories of young girls doing jobs – dog trainer, fashion designer, secret agent, brain surgeon – that you’d think would be difficult to break into when you’re twelve years old. And there was always, always a story about Victorian orphans having a terrible time of it.
Not surprisingly, the Victorian miserylit stories were my favourite. Stories I remember include 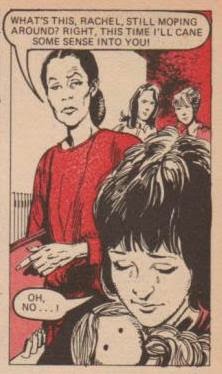 ·        Chief amongst these stories was Bunty’s School for the Unwanted Ones. Following the death of her father, our hero, Valerie Matthews was packed off to an academy run by the cruel Dr Croome and his bevy of equally sadistic staff. If you were looking for a story in which girls were frequently physically punished with a variety of different implements (and it turns out eleven-year-old-me kind of was) then this was the story for you.
I certainly remembered a panel in which Val was bent over a stool in the headmaster’s study and struck with a tawse. Although Google image isn’t helping me out with that particular one,  I found a few other punishments from School for the Unwanted Ones because, happily, that sort of thing just kept happening to the characters. Every single week. Like I said, they were having a terrible time of it. 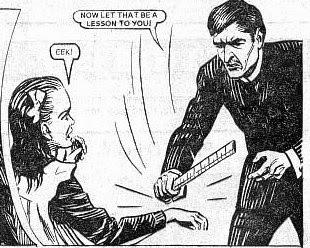 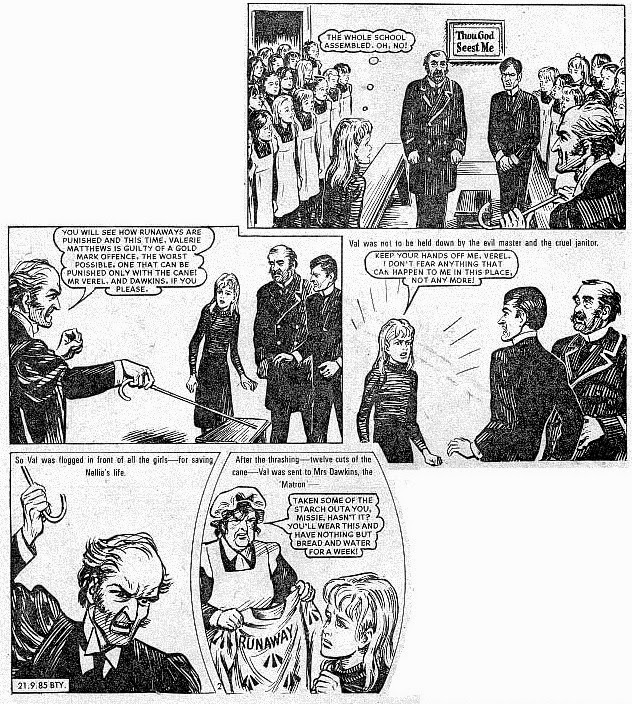 I’m not saying that the frequent depictions of girls getting spanked or caned in girls comics was necessarily an indication of any particular perviness on the part of the writers. Little girls do just love reading about other little girls suffering horribly. And the writers were happy to lay the misery and suffering on with a trowel. Tammy had a story called The Slaves of War Orphan Farm which ought to win some kind of award for the most gleefully appalling title ever given to something aimed at children.
You didn’t even need to be stuck in the Victorian times for awful things to happen to you in Buntyworld. One story, The Courage of Crippled Clara subjected its protagonist to a level of physical chastisement that I remember finding somewhat startling at the time. And intriguing, obviously. She gets spanked with a belt by her father and then caned at school by the headmistress for relatively minor offences just because the local Lord of the Manor has taken against her and apparently that’s enough to get you punished by all and sundry. Not that I had any great love for The Courage of Crippled Clara. Maybe I preferred my punished heroines to be living in the previous century. Or maybe it was because it was basically another variant of a pony story and I was definitely not the kind of girl who spent her weekends mucking out stables.
Mostly, I think my indifference came from the fact that the artwork was a bit shit. It certainly stuck in my mind, though. In fact, in the almost thirty years since I was a regular subscriber to Bunty and Nikki, the stories have stayed with me. It might not have been great literature but it was absorbing and entertaining. And sometimes it involved girls my own age being bent over and beaten. Much like the stories I made up in my head at the time.
Those kinds of comics are gone now. Bunty, one of the first, was the last to bow out in 2001. And by then the format had changed out of all recognition as it aped the glossy magazine style of women’s magazines.
I want to believe there would still be a market for those kinds of serial stories amongst nine to twelve year olds now. Back then the comics were produced on the cheapest possible paper with only a couple of the pages boasting full colour. You only got a free gift once a year in order to soften to the 2p price hike.
Comics cost about 16p when I was a regular reader which barely made a dent in my £1.50 pocket money. In fact, a copy of Bunty cost about the same as a Cadbury’s Flake.  You’d be hard pressed to buy a kid’s magazine for less than three quid these days. So unless youngsters are regularly getting £30 a week pocket money, comic buying has become a fuck of a lot more expensive. They’ve become glossier and now give you a free gift every single week, sure, but they’ve rather overtaken the Cadbury’s Flake in terms of retail price.
All of which makes me sound like the most tedious sort of “It were better in my day”-spouting old person. “You young people, with your  overpriced Disney comics and your ‘interactive media’ bollocks. We had proper comics in my day. With proper actual child cruelty. Not like your namby-pamby non-child-beating nonsense you get these days. It was absolutely brilliant.” 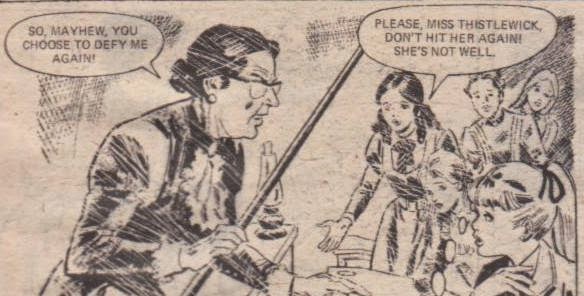 2 thoughts on “Bunty Comics made me a Spanko!”