Patricia Green and Karin Ito’s new novel, Master of Two, introduces us to Kevin Watson and his two lovers, Renee and Amiko. Kevin is a dominant Master as well as being a wealthy businessman doing some kind of brokerage-type job.

Not because of the keeping-two-women-and-demanding-absolute-submission-from-them thing. I’m totally on board with that. But because of the way he believes that his money gives him the right to swagger around and bully every single person who crosses his path. He has no scruples about waving his contacts and connections in people’s faces if it means he can get his own way.

At one point in the story he needs help from a police detective. Unhappy with the detective’s proposed timescale he rings up the Governor in front of him and gets him to ‘cut through the red tape’. Kevin finishes up his phone call by saying to the Governor “When’s the next fundraiser by the way? I wouldn’t want to miss it.”

And that’s the sort of horribly twattish behaviour than can make a reader scream “You pompous, unbearable knob jockey!” at the top of their lungs at their kindle. And you don’t half get some funny looks on the train when you do that, I can tell you.

Clearly I have a bit of a problem with ostentatiously wealthy guys in fiction. Which is a bit unfortunate given that they’re something of an archetype in the romance genre. There’s loads of them out there including James LeBlanc in Normandie Alleman’s Daddy Morebucks, Brayden James from Bella Bryce’s Waldorf Manor series and, of course, Christian Grey. Grey is a prime example of a wealthy wanker presented as every girl’s dream guy. I managed to convince myself after I read the second Fifty Shades of Grey book that the third one would see Christian Grey lose all his money somehow. The heroine, Ana, was always bleating on about how his money didn’t mean anything to her and I thought that E L James might give the readers the chance to see that for ourselves. It would also do away with one of Grey’s less attractive habits that of ostentatiously bestowing expensive but incredibly unimaginative gifts. But, no. That’s not where the story was headed. Grey kept all his money and the pair lived happily and wealthily ever after. 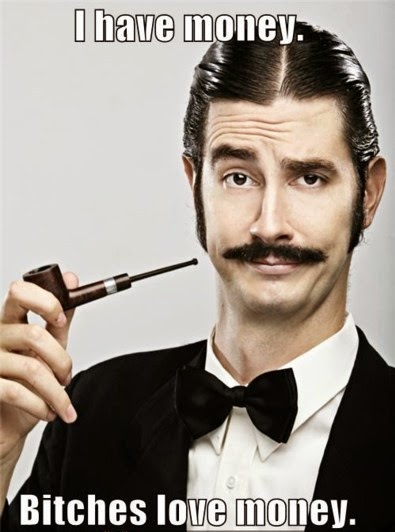 I don’t mind wealthy guys so much in historical fiction. In the same way that poverty looks so much more attractive when viewed from a century or more away – Victorian peasants look so much more picturesque than modern day benefit claimants – wealth looks offensive when it’s happening in another era.

I’ll happily stick wealthy Lords in my Victorian-based fiction. Although perhaps I just have less of a problem with people who inherit their wealth rather than make it themselves. Not that I’m particularly OK with the landed gentry but at least people who are born into money know they’re lucky which makes them slightly less insufferable than the “I work hard for my money” 1%ers. You don’t work 1000 times harder than a practice nurse. Fuck off.

All of which may be ever so slightly off the point.

Master of Two is an energetic story in which one of Kevin’s two women, Amiko, is kidnapped leaving him and Renee, the other member of the trio, the task of tracking her down. They enlist the help of Ross Adler, an objectionable but effective Private Investigator and embark on a rescue mission across Europe as they follow Amiko’s trail and try to find out who has taken her and why.

Meanwhile, Kevin’s sister Lori is dangerously ill in hospital following a brain injury and Kevin needs to do everything he can to ensure her wellbeing.

Amidst all the fast-paced excitement, it’s a wonder the authors manage to fit in any erotica at all but, don’t worry, they totally do. With Amiko missing in action for most of the book, the majority of the sex scenes take place between Kevin and Renee who – quite believably, actually – temper their frustrations and anxieties over their lover’s disappearance with a whole bunch of sexy spankings and stern domination. Kevin is frequently referred to as a ‘sadist’ but there’s nothing unpleasant in his brutally rough play. Renee is more than receptive to his rules. There are a few nicely satisfying scenes with all three lovers which illustrate well how the One Master Two Slaves dynamic works for this little group.

So, despite my misgivings about Kevin, I really enjoyed this book. It is well plotted, engaging and frequently very hot indeed. Clearly Patricia Green and Karin Ito make a good writing partnership.

I have absolutely no idea how two people go about writing the same book. Do you split the books into chunks before you start, merging them back together at the end, checking that you haven’t flatly contradicted one another in the process?

Or does the manuscript get passed back and forth between writers? Each crossing out and re-writing what the other has written beforehand, fighting over the story’s direction until the whole thing deteriorates into a petty editing war with chunks of text being constantly deleted and re-added and sneaky aggressive comments like “Patricia sux” or “U r a loser, KI” being inserted into the narrative.

I don’t think for a second that this is how Patricia Green and Karin Ito work, obviously. They are clearly professionals and have the excellently written book to prove it. I think I’m just worried that this is how things would turn out if I ever tried to write a book with someone else.

As far as star ratings go, there is a certain type of Amazon reviewer who will base their star rating on how much they liked the principal character. I don’t hold with that school of thought at all. I don’t much like Harry Flashman, Madame Bovary or the one who isn’t Sam-I-Am in Green Eggs and Ham (and come to think of it Sam-I-Am is pretty annoying himself) but that doesn’t stop their books being great.

Master of Two is a very good 4 star read whatever I might think of Kevin Watson as a guy. He’s just lucky I’m not reviewing this on fictionalcharactersiwouldliketogoforapintwith.com. He’d be lucky to scrape a single star, the smug twat.