Now that the A-Z Spanking Blog challenge is over, I feel the need for a new endeavour into which I can sink my teeth. Or at at least take a playful nibble at.

So welcome to the first of Etta Stark’s Exciting Book Reviews!

Etta Stark’s Best Attempt At An Entertaining Review Of A Book Which May Or May Not (In The Reviewer’s Opinion) Be Exciting. ESBAAAEROABWMOMN(ITRO)BE for short.

These will be reviews rather than promotional posts so there won’t be any blurb or excerpts. There’s plenty of that sort of thing on the interwebs already. This is going to be No Holds Barred stuff. Well maybe some holds barred in the interests of good manners and stuff. Wait, is that a wrestling phrase? I’ve never thought about it before. If you say something is ‘no holds barred’ are you basically saying that you are happy to metaphorically pin somebody down by their scrotum?

My reviews will operate with a 5 star rating system. The nuances of which are explained below:

Five Stars – Awesome, amazing and fabulous. I want to elope with this book and have its little half-human, half-literature babies.

Four Stars – A great, enjoyable story. I may not want to go ‘all the way’ with this book but we could be friends. Definitely on one another’s Christmas Card lists.

Three Stars – A perfectly readable, good book. Not necessarily something I could get totally excited about – maybe not ‘my thing’ – but fine.

Two stars – Disappointing, sloppy or kind of boring. Probably something I carried on reading in the hopes that it would improve – only to get to the end and find that it didn’t.

One star – Risible nonsense. Stuff this bad I would normally abandon before the end of the book so presumably I only completed this one because all my other e-books suddenly disappeared in some kind of freak Kindle accident. Or maybe I was made to read this book for a bet. Or perhaps I felt that I had sinned in some terrible way and needed to be punished. 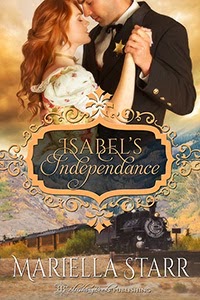 So the first book to be reviewed is Mariella Starr’s Isabel’s Independence.

One of the first things you’ll notice about this book – in fact this may even be the thing that encouraged you to buy it in the first place – is that it’s long. Rather than the standard novella length for spanking romance, this has the wordcount of a proper substantial book. Not Bleak House long but, to pick a book within handy reach from where I am sitting – roughly the same length as Mary Shelley’s Frankenstein. Whereas my books clock in at around 100 pages a time so are more pamphlety in nature. Or to pick another book – roughly the same size as Anais Nin’s Eros Unbound.

So before you even start reading, you know you are going to get good value for money wordwise. Obviously, words per dollar isn’t the only criteria by which one should judge literature. Luckily for us, Mariella Starr has chosen pretty good words and fashioned them in a highly readable and enjoyable order. So, wins all round.

The story’s eponymous hero, Isabel Piper is an aspiring writer who has found herself trapped in a life of thankless drudgery playing housekeeper and cook to her four brothers following the death of her parents.

When her eldest brother decides to take a wife who has even less regard for Isabel than her brothers do, she decides to leave and begin a new life as an independent woman, made possible by a hitherto unknown inheritance and and several new unexpected income streams bestowed on her by her wealthy aunt.

Thanks to this, Isabel’s new life in Overton, Colorado comes complete with a small fortune in the bank and a substantial interest in half the town’s businesses.

As a new female in a male-dominated town, Isabel is the focus of plenty of men’s attention. None more so than Deputy Bill ‘Hutch’ Hutchinson, the town’s conscientious lawman.

Isabel and Hutch don’t get off to a great start especially after Hutch spanks Isabel for endangering herself and then steals a kiss in front of the biggest gossip in town. Isabel may not be wholly convinced by Hutch but it is plain to see that Hutch has been head over heels with Isabel since the moment he laid eyes on her.

Circumstances, of course, push Hutch and Isabel closer and closer to one another. Isabel befriends Sarah, a teenager who has been abused by the local playboy and then shunned by the whole town. And the three of them become a close family unit. There are plenty of characters in this story. Some better drawn than others. The one bum note was the minister and his wife’s story which I didn’t think brought much to the book. Bringing domestic violence into a domestic discipline book is always a tricky one and in this case I don’t think it really worked. Other characters, however are a delight. Especially the young doctor, Ben who has set his heart on Sarah.

The book is fairly light on spankings and rather disappointingly, Isabel never really seems reconciled to Hutch’s method of disciplining her even by the end of the story.

Overall, this is a deeply satisfying story with a strong believable relationship at its core. There are a number of action sequences which are well handled and some truly appalling villains for our noble lawman to come up against.

It would be great to see a sequel to ‘Isabel’s Independence’, especially one concentrating on Sarah and Ben’s relationship. I would also be interested to see what Isabel does with her insanely large amounts of wealth. She’s practically richer than the Queen. It would be nice to see her embrace a  more philanthropic lifestyle. Maybe she should sort the road out that she kept complaining about at the beginning of the book. Hutch and her have already figuratively cleaned up the town, maybe they should do it literally as well.

Z is for Zzzzzzzzz

I’m going down to Corbin’s B