Comedian, actress, songwriter, screenwriter and all-round fucking genius, Victoria Wood died last week. In the year which seems to be determined to be remembered as the one where everyone dies (and it’s only April for fuck’s sake), Victoria Wood’s death hit me particularly hard. I think she was brilliant. And not just because she wrote a song which contained the line “beat me on the bottom with the Woman’s Weekly”.

Wood was a fantastic comic writer and performer. There was never any meanness to her comedy. Her comic creations weren’t grotesques. They often felt like people you felt like you knew even if you actually didn’t. So many of the tributes I have been reading online, have pointed out what an incredibly generous comic writer she was. She always gave the best lines to her co-performers.

As a teenager in the 80’s, I was all too aware that there really weren’t that many female comedians around. In fact, the numbers of men and women in comedy in still massively imbalanced. Why is that? Think of the people in your immediate social circle. Are your female friends less likely to make you laugh than your male ones? I really doubt it. There’s a whole load of ingrained sexism behind the fact that 95% of the guests on BBC panel shows have a penis.

But institutionalised sexism in television comedy isn’t the point of this post. Victoria wasn’t just one of the best female comedians, she was one of the best ever, regardless of sex. She was absolutely brilliant.

And of course she wrote and performed the marvellous, marvellous Ballad of Barry and Freda,


I was thirteen when I heard first heard her perform it during An Audience With Victoria Wood. I’m not saying I was turned on by a comic song, exactly, but as a nascent pervert, it made rather an impression on me. There is a lot of kink in that song.

Bend me over backwards on my hostess trolley!

Dangle from the wardrobe in your balaclava!

No cautions, just contortions. Smear an avocado on my lower portions!

And, the perfectly perfect final line: “Beat me on the bottom with the Woman’s Weekly!” In the tributes which have poured forth since last Wednesday, this is the line that has been quoted the most.

So, you know, it’s not just me. Everyone’s a spanko really.

In fact, Current Gentleman Spanking Friend has asked me to get hold of a copy of the Woman’s Weekly before our next date, He may want to check out the knitting patterns but it seems more likely that he is planning a tribute to Victoria Wood of his own. In fact, I suspect he might be a bit of a pervert. 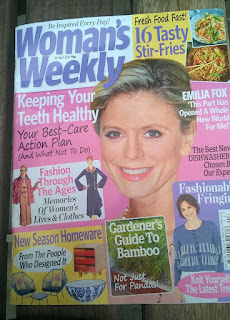