This is my ‘B’ post for the Spanking A-Z Blog Challenge. “What’s that?” you ask. Check out my page here for more information and a list of all the wonderful bloggers taking part.

Barbie is without a doubt a feminist icon. You only need to look at the number of different careers that woman has successfully taken on. She’s a ballerina, she’s a school teacher, she’s a vet, she’s an architect, she’s a computer programmer. She knows how to fly a jet. She’s even been into space, for goodness, sake. How many of you can say that?

And all this while having feet the same size as one of her eyelashes. She’s basically battling a disability every day of her life. No-one gives her credit for that.

And yet the poor woman comes in for a lot of hate.

I have noticed that friends who are mothers of daughters tend to find the range of pink glittery girly merchandise a bit ghastly and congratulate themselves if their daughters show a fondness for pirates and spaceships rather than Barbie and Disney princesses. This bothers me.

I don’t think that any toys should be exclusively aimed at boys or girls. Children should play with whatever damn toys they want to regardless of what sex they are. But I do think that it’s a little troubling that girls are being steered away from toys traditionally associated with girls. It bothers me because I think that the world is still fundamentally a sexist place. Men are considered by society to be superior to women. Femininity (whatever that means) is considered weaker and less desirable than Masculinity (whatever that means). 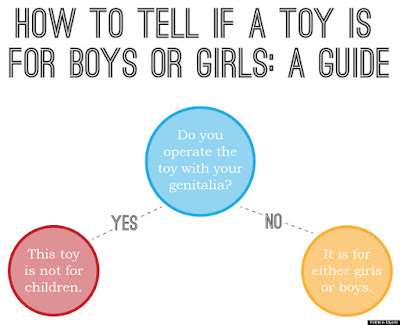 Daughters are praised for eschewing ‘girly’ toys because rejecting items that are considered ‘feminine’ in favour of ‘masculine’ ones is considered a step up by society. Boys are discouraged from playing with toys from the pinker side of Toys R Us because it is essentially a demotion.

So if you don’t like your daughter playing with pink glittery princess shit, well you’re part of the problem of gender inequality in this country, that’s what I’m saying.

And sure, you might argue that pirates and spaceships are just so much cooler than dolls and tea-sets. In fact, it seems to be considered an incontrovertible truth by many of my friends. But, you know, as a wise man once said that’s just, like, your opinion, man.

Sure, pirates are great fun if you like lauding violent criminals who still operate in the world right now. Most space-themed toys just seem to be excuses for battles in space (there was a popular series of films about that, wasn’t there? Space Battles or something).

Which is fine. Suitable for boys, girls, grown-ups, whatever. But it’s like how I feel  about movies. I get bored during battles and car chase sequences. I like movies where people talk to one another.

And dolls and all the other stuff from the ‘strictly for girls’ section are all about interpersonal relationships. At least they were the way I played with them. Regardless of whether I was playing alone or with friends, the toys provided the opportunity to create stories and situations in which people interacted with one another. They fought, they fell in love, on more than one occasion one of them would develop the ability to hypnotise the others for the purposes of evil. It was all about the stories. Toys are just the props kids use to spur on their fertile – and often twisted – imaginations.

I am unashamed of my love for Barbie. For about six years all my Christmas and birthday presents were Barbie-related. I had the pink convertible, the mobile holiday home, the horse,the Barbie town house, all the furniture and household furnishings. Including a shower which actually worked! (If you could be bothered to fill it up and really who could after the first couple of times?) The horse was pretty shit but everything else on that list? Fucking awesome.

My main Barbie was called Kay and she was an artist. The entire top floor of her house was her artist studio. I used to cut pictures out of the Sunday newspaper colour supplements and stick them round her studio as examples of her work. She had a varied artistic style ranging from Munch’s The Scream to Turner’s watercolours.

My older sister’s Barbie was a model by profession because my sister argued that you couldn’t look like that and not be a model. I argued the case at the time and am pleased to realise that years later, I was right. You can look like Barbie and do whatever job you want. You can be a Rocket Scientist, if you want. In fact, Barbie probably is a Rocket Scientist.

Barbie’s looks are responsible for a lot of her bad press. She presents an unrealistic body image to young girls. It’s a bit of an unfair accusation. She’s basically a cartoon character as well as a toy. He-Man is an unrealistic body image for boys to aspire to. My Little Ponies are a terrible role-model for ponies. Seriously any ponies reading this blog, don’t aspire to look like Rainbow Dash. Apart from anything else, if your head was that big, you’d probably just fall over all the time.

Nobody actually wants to look like Barbie, surely? Aside from the feet-so-tiny-they-would-qualify-you-to-collect-disability-benefit issue, you’d also have no nipples, knees which refused to bend more than 30 degrees and arms which were permanently stuck in a L shape. That would get old pretty quickly. Unless you were Gymnast Barbie in which case your limbs would move freely and after a year they’d limply flop about all over the place. Gymnast Barbie: the boneless wonder.

Bratz dolls are even weirder looking. I quite like Bratz  (not Bratz babies, though. They’re just disturbing). I like the fact the fact that you take their entire feet off in order to change their shoes. Much easier than fiddling about with Barbie’s footwear. Plus with time and a lot of patience, you can actually get a Bratz doll to stand on her own unsupported. Something poor Barbie could only dream of. (And yes, spending hours trying to balance one’s daughter’s Bratz doll so she doesn’t fall over is a perfectly legitimate way for a grown woman to spend her evenings.)

All toys are for everyone. Pulling down the signs which say “Boy’s Toys” and “Girl’s Toys” is only the first step. We have to stop thinking about them in those terms. And as long as people consider certain types of toys to be fundamentally inferior to other types of toy (because of their pinkness and/or glitteriness), then we really aren’t there yet.

Anger (and other deadly sins…)